Emerging Artists: The Women of The Wynwood Walls 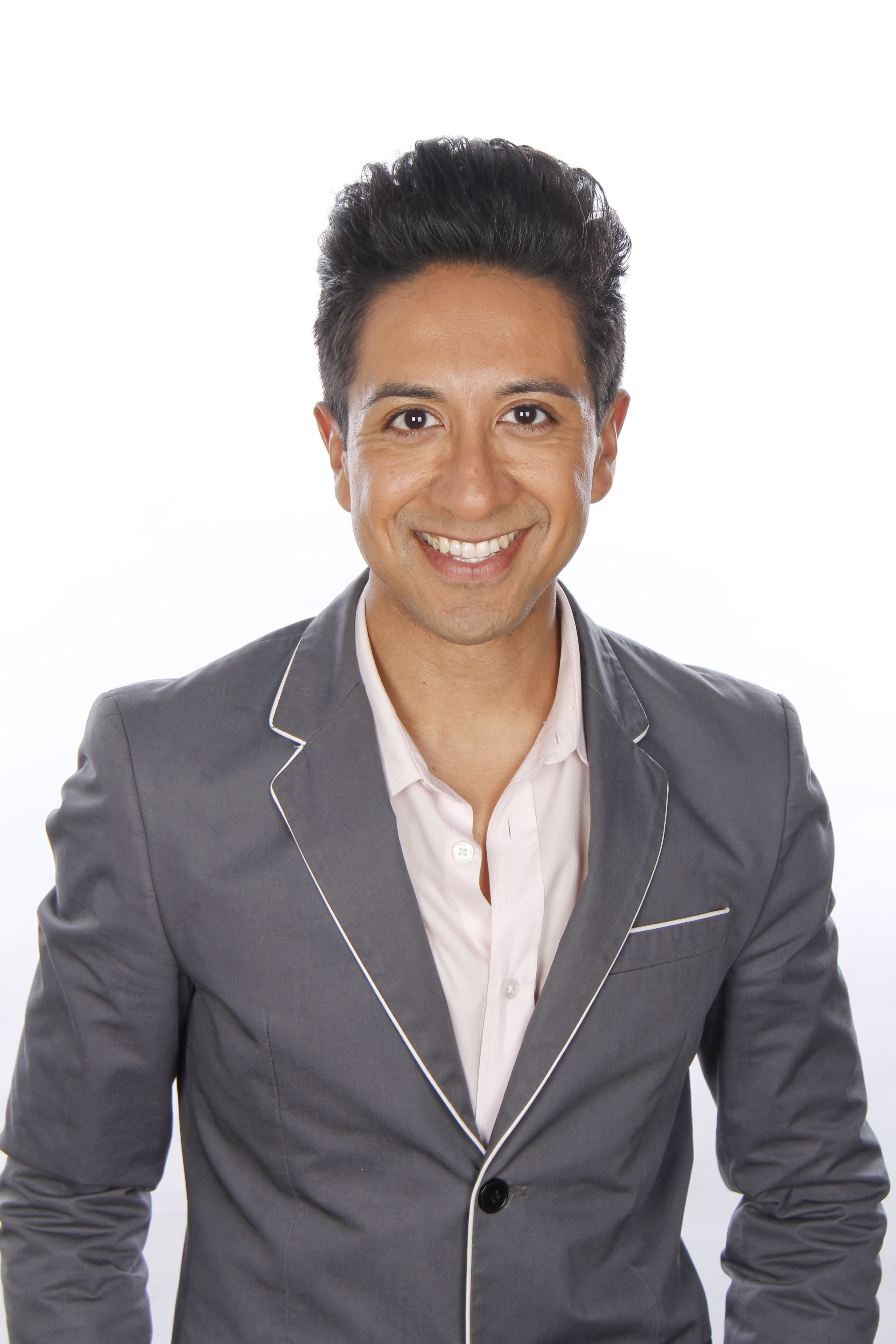 Beaches, bathing suits and dance clubs definitely come to mind when you think of Miami. But for far more than a decade, this city has been granted the title of art hub to the world—and the enclave of Wynwood reigns supreme. Arts visionary and real estate developer Tony Goldman from Goldman Properties, had the idea of transforming Wynwood—the once rough Miami warehouse district, into a vibrant, colorful neighborhood featuring the works of top street artists back in 2009. Enter, Wynwood Walls.

According to the Walls’ website, Tony once said: “Wynwood’s large stock of warehouse buildings, all with no windows, would be my giant canvases to bring to them the greatest street art ever seen in one place.”  And he certainly followed through on his vision!  Over the years more than 50 artists representing at least 16 countries have had their art cover more than 80,000 square feet of these walls.  Amongst those 50, there have been plenty of female artists featured in this famous district.  Below is a look at their works and a little bit more about them. 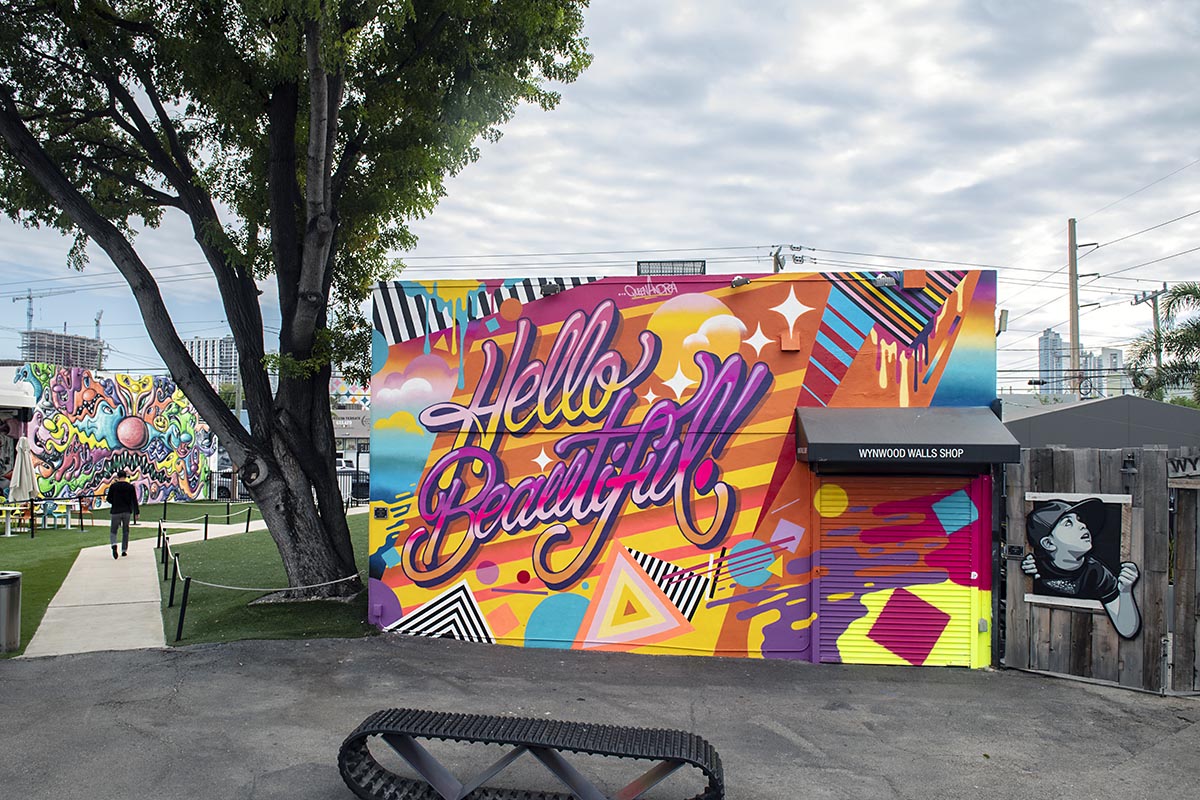 Queen Andrea at the Wynwood Walls, Courtesy of Goldman Properties

She eventually went on to earn a degree in Graphic Design and has been perfecting her graffiti and typography skillset for almost 20 years.  Known for her oversized typography murals, the Queen has been featured in fashion lines, brand collabs, magazines and major art shows around the world.

In addition to commissions from the Wynwood Walls, she has also worked with the City of New York.  She is only 1 of 5 women chosen to paint the Houston & Bowery mural in Manhattan. 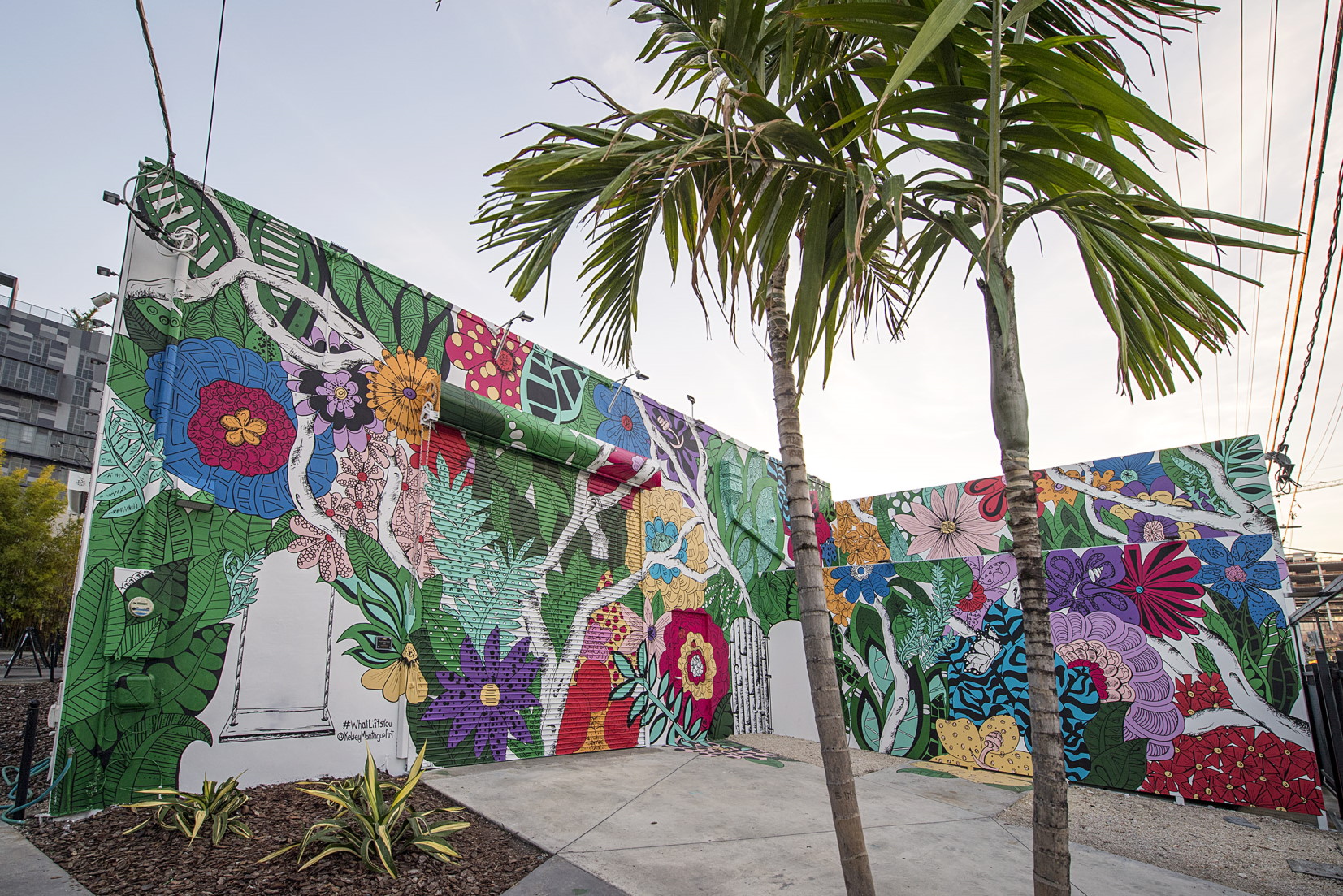 Kelsey Montague at the Wynwood Walls, Courtesy of Goldman Properties

Ms. Montague is without a doubt a social media darling.  Her wing-inspired artwork has been a staple on walls in big cities such as New York and Buenos Aires, Argentina.  On her website she states, “My murals specifically invite people into a piece and then invite people to share their experience online.” It sure is hard to resist not wanting to get in between those wings and have a friend snap a pic for all to see.

While her work may seem lighthearted, Kelsey’s educational background is quite solid.  She earned a degree in Art, Design and Media from Richmond University in London and also studied art in Florence, Italy.  After graduating she moved to New York City where she developed her pen and ink style.

Her talent has caught the eye of big companies such as Coca-Cola, Universal Studios and Johnson & Johnson who have commissioned her work for distinct projects. 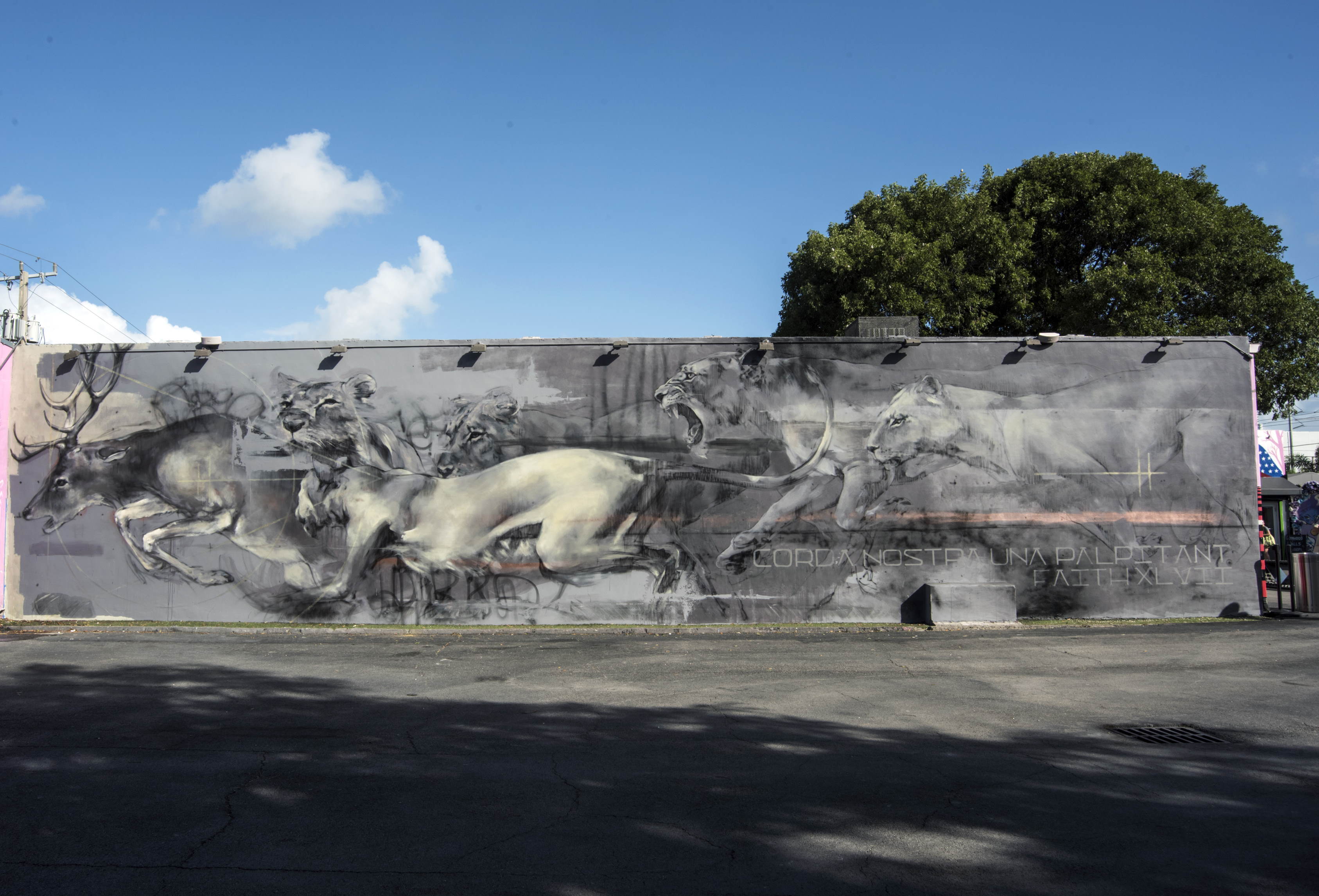 Faith XLVII at the Wynwood Walls, Courtesy of Goldman Properties

Her real name might be Liberty, but you’ll never want to escape the sights of artist Faith XLVII’s works.  This South African artist started making waves in the art scene back in 1979.  As a young graffiti artist, she took on the name Faith47 as a reference to her grandmother’s numerological theorem.

What started off as simply a passion for graffiti art eventually became a multidisciplinary practice which includes painting, video installation, projection mapping and even printmaking.  While some may look at a rundown building as a way of society getting rid of the unwanted, Faith XLVII takes over these structures, giving them new light thanks to her artistic skillset.

Not only will you see her work on abandoned structures, but it can also be found in museums and galleries. Lighthouse Properties in Philadelphia, Pennsylvania, the Cyril Ramaphosa Foundation in South Africa and the Calais Museum of Fine Art in France are just some of the more prominent places where her artwork has been shown or is part of either private or public collections. 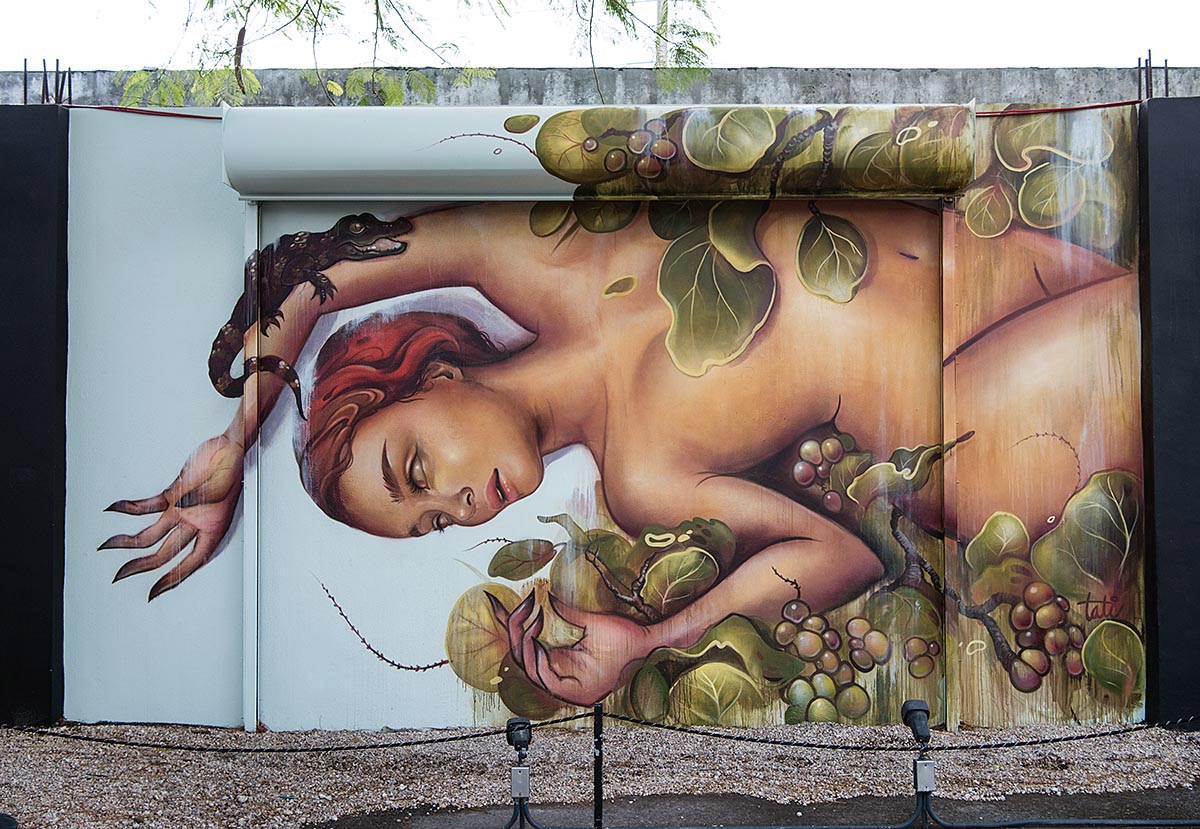 Tatiana Suarez at the Wynwood Walls, Courtesy of Goldman Properties

It’s all in the eyes with Tatiana Suarez’s work. The Miami artist will certainly captivate you with her doe-eyed figures ornamented with sexual undertones. The folklore and mythology of her Brazilian and Salvadoran background also form a big part of her work. How so? Well, if you’re a fan of Suarez’s art, you will have noticed indigenous face paint and tropical color palettes of South American landscapes in her work.  Mixing the beautiful, the exotic and even the creepy, Tatiana creates enchanted narratives that you will never forget. 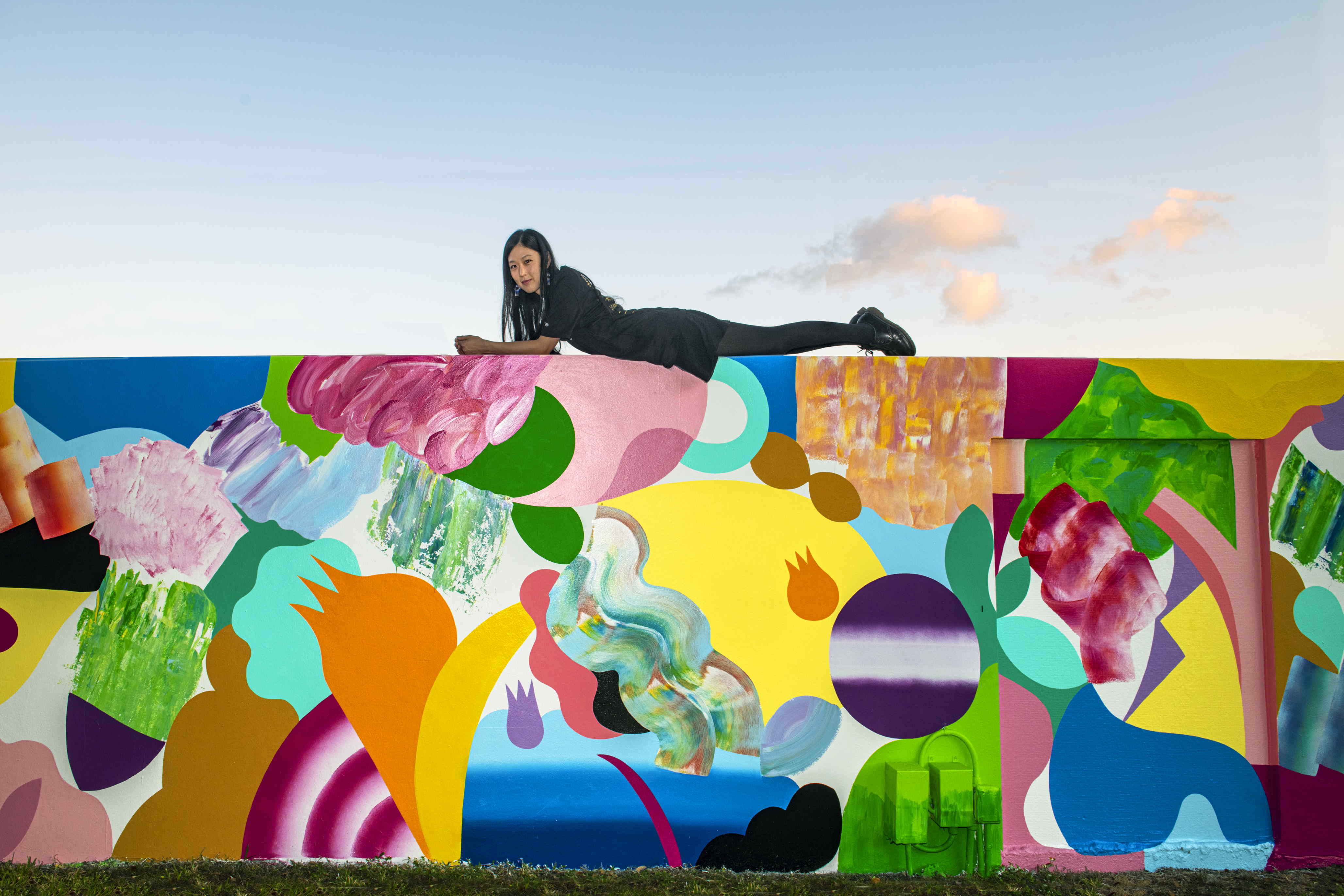 Mina Hamada at the Wynwood Walls, Courtesy of Goldman Properties

“Fresh and friendly” can describe Mina Hamada’s paintings and drawings: a dream world combining orient and occident, philosophy and a youthful spirit. Abstract and organic shapes adorned with soft, bright and warm colors are prevalent in painter Mina Hamada’s work.

Born in Louisiana, United States, Mina was raised in Tokyo, Japan.  It’s in Asia where she studied Design and Illustration at the Sokei Academy of Fine Art and Design. She eventually moved to Barcelona, Spain in 2009 where she began experimenting with murals and graffiti.

Fast forward to 2011 when she met Zosen, with whom she began to collaborate on murals, serigraphy and paintings—leading to her participation in various mural festivals and exhibitions.

Hamada’s international background is reflected in her work which has titles in English, Japanese and even Spanish. 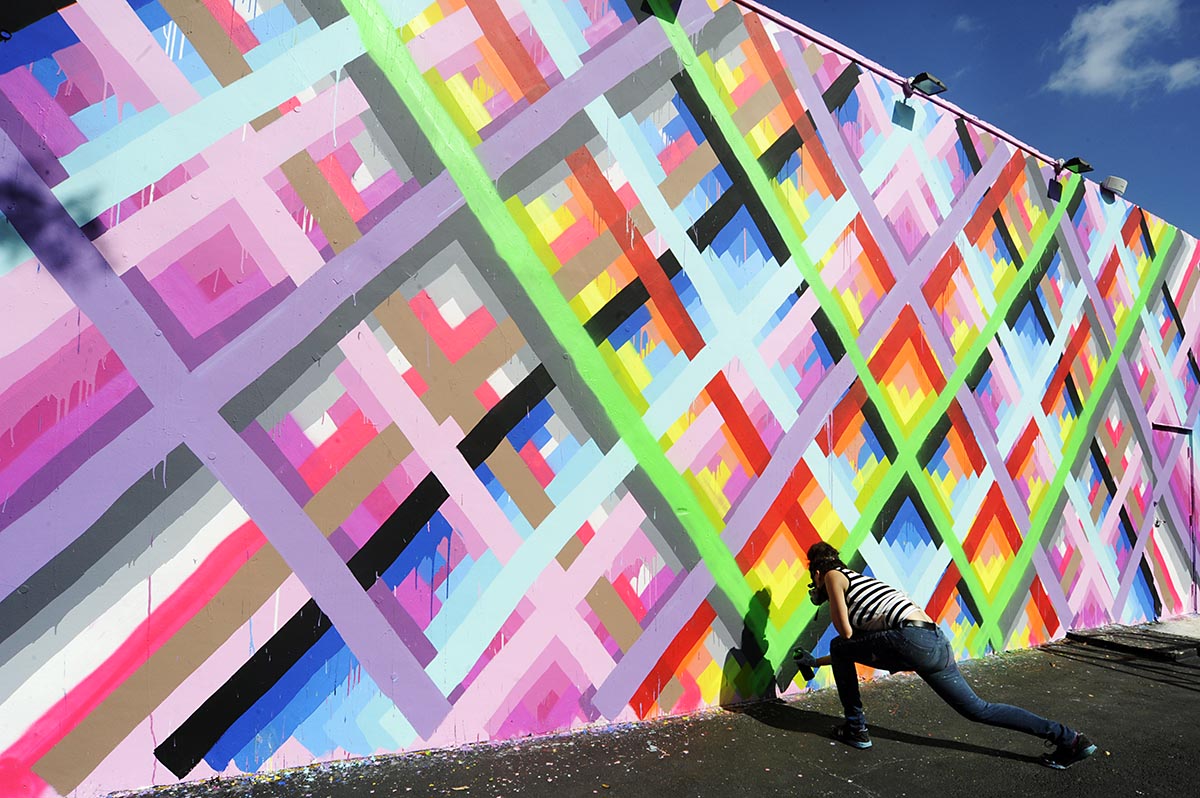 Maya Hayuk at the Wynwood Walls, Courtesy of Goldman Properties

Vibrant colors, intricate patterns and symmetrical compositions on massively scaled murals form part of Maya Hayuk’s artwork.  Hayuk is based out of Brooklyn, New York where she has a full-time studio practice. She’s also quite the smartie artie. She earned a BFA in Interrelated Media from Massachusetts College of Art in addition to studying at Virginia Commonwealth University (Richmond, VA), the University of Odessa in Ukraine and at Skowhegan School of Painting and Sculpture in Maine.

In addition to street art, Maya has also found success in the world of publishing. Her book "Just Good Vibes" and "Round the Way" were released in 2007 and 2010, respectively.

Whenever her work is not being seen at exhibitions, she keeps busy in the world of music. Hayuk has created album covers, stage sets, posters and even videos for acts such as Rye Rye/M.I.A., The Beastie Boys and The Flaming Lips.