When recounting the greatest female artists of the past century, Louise Bourgeois certainly earned her seat at the table. Bourgeois spent nearly her entire adult life creating artwork that addressed her childhood trauma. She was born on December 25th, 1911, three years before the start of World War I (WWI). Her parents, Isadore Bourgeois and Joséphine Valerie Fauriaux, had a complicated relationship that strongly influenced the young Louise. Bourgeois’s father, who fought in WWI, had an on-going affair with the family's live-in teacher for a little over a decade; a discovery which deeply disturbed Louise. She lived with this trauma until the day she died, on May 31st, 2010. Bourgeois remarked on numerous occasions that she received closure through creation.

“I transform hate into love”-Louise Bourgeois

French Sculptor Louise Bourgeois in her Studio in New York City in 1995. Photo by Porter Gifford/Corbis via Getty Images.

If you’re familiar with Bourgeois’s ceramic work, you may be familiar with the visuals of something being twisted—an ode to the time she spent helping her parents at their tapestry workshop. The physical sensation of twisting tapestries was deeply associated with her younger years, which is likely why Bourgeois incorporated this practice into the works addressing her childhood trauma. “Spiral Woman” (1984), is a bronze and slate piece that hangs from the ceiling, dangling lifelessly in the air, showing the physical nature of twisting the water out of tapestries, something she did countless times as a child alongside her mother.  Bourgeois’s mother came down with the Spanish flu in 1916 and never fully recovered. Sixteen years later, when Bourgeois was only 22 years old, her mother passed away.

Her mother’s death caused a deep depression, which led Bourgeois to abandon her studies of mathematics, and begin her foray into art. While she went on to create works that primarily focused on her healing, she also created works to express her admiration for her mother. 'Spider' (1994) is considered to be a tribute to her mother. “Spider” (1994) is a large sculpture of a spider that stands on the floor or ground. Viewers can even stand underneath this piece and marvel at its symbolism and power. Bourgeois published the poem “Ode to my Mother” in 1995 to complement this mighty piece. In 1997, Bourgeois finished the piece “Spiders” to act as a sequel to “Spider” (1994). As the years went on, more and more creative crawlers took the world by storm, all inspired by Bourgeois’s best friend, her mother. It’s wild to think that the spider sculptures that turned Louise Bourgeois into a household name, started as quick ink drawings in the 1940s, nearly 50 years prior. 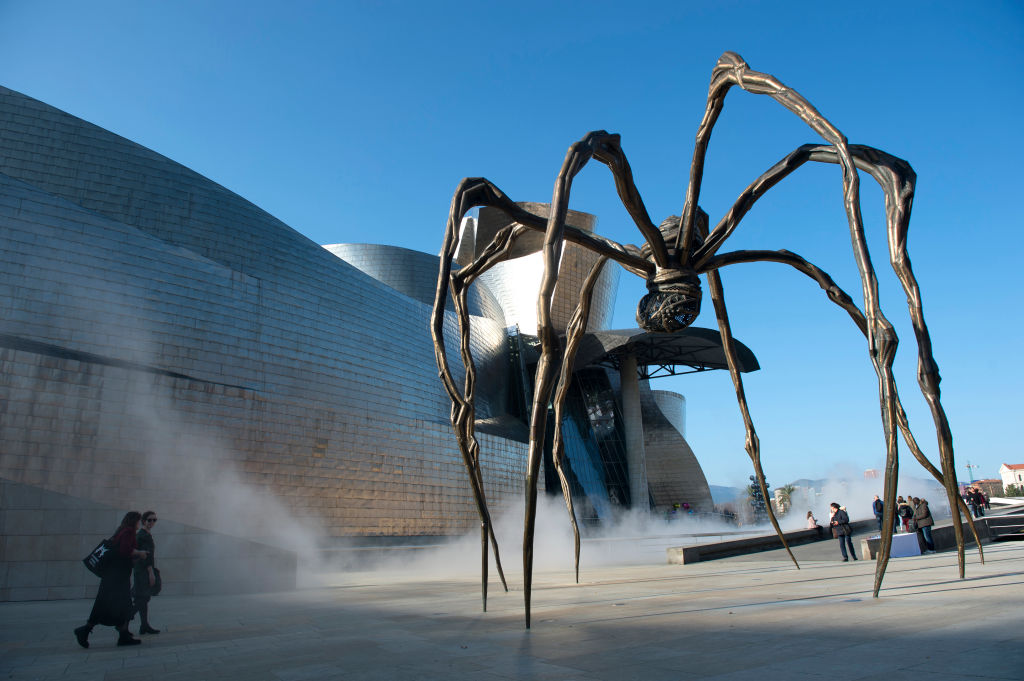 French-American artist Louise Bourgeois' sculpture "Maman" next to the Guggenheim Bilbao Museum in the Spanish Basque city of Bilbao, on February 7, 2020. Photo by ANDER GILLENEA/AFP via Getty Images.

Unlike many visual artists, Louise Bourgeois’s artistic approach was geared entirely towards what would be most healing for her, rather than the end result.  She turned her hurts and shadows into haunting sculptures. This practice allowed Bourgeois to feel the physical sensation of creating works as well as the sensation of causing their demise. Her creative process worked under the foundation that destruction is a form of creation. The metaphysical release associated with breaking that which at one point broke her was the chief purpose of Louise Bourgeois’s body of work.

“You can stand anything if you write it down.” -Louise Bourgeois, 2010

Bourgeois was, and is still to this day, known for creating not only visual works, but also poetry, through journal entries, and voice recordings. She remarked that through creating written, spoken, and drawn artwork, she was able to keep her house in order. From an early age, Bourgeois kept a diary to recount her days and feelings. As she aged, she kept this practice and integrated her journal entries into her works of art—“Home for Runaway Girls” (1994), “Instruction” (2002), “Be Calm” (2005), “I Have Been to Hell and Back Handkerchief” (2007), and “Do Not Abandon Me” (2009-2010). Additionally, Bourgeois has written and co-written a collection of books, including: “He Disappeared Into Complete Silence” (1947), “Destruction of the Father /  Reconstruction of the Father: Writings and Interviews” (1923-1997), “Louise Bourgeois, Tracey Emin” (2010), and “To Whom It May Concern” (2011).

Due to the nature of many of Louise Bourgeois’s later works, one could argue that her artwork complemented Sigmund Freud’s theory of creation, which states that a key element to creating art is the expression of unconscious desires and instincts. Since those who knew Bourgeois best have said that she lived in a constant state of psychoanalysis through her art and therefore self, it felt necessary to bring some psychoanalytic theories to her works. Her works that truly complement this theory include: “Tits” (1967), “Fallen Woman” (1981), “Couple” (2003),“The Feeding” (2007), “I wanted to love you more” (2009-2010), “Just hanging” (2009-2010) and “And so I kissed you” (2009-2010).

In addition to healing from her parents' impact and deaths, Bourgeois also used her artwork as a coping mechanism when her son Michel died in 1990. Through the highs and the lows, art was what stabilized Bourgeois. She addressed her reaction to being a mother with her piece “Red Room (Parents)” (1994); Bourgeois commented: “I do what I can, I never promised you a rose garden”. “Red Room (Parents)” (1994) showcases her ability to make an environment into a work of art that elicits authentic emotion.

Louise Bourgeois is also known for her series, “Insomnia Drawings”. Between November 1994 and June 1995, she created a total of 220 drawings and sketches. When Bourgeois couldn’t fall asleep at night, during the winter of 1994 and spring of 1995, she would express herself on the paper she kept beside her bed. This astonishing series truly reflects Bourgeois’s restlessness and isolation throughout this period of her life. Bourgeois’s series “Insomnia Drawings” shows that you can turn any negative situation into a creative endeavor, so long as you have a creative mind and art supplies nearby.

From unintentionally becoming an icon for the feminist artist movement WACK! to decorating the world with gigantic spiders, Louise Bourgeois sure made a name for herself through her work. Her creative process and body of work nudges each of us to delve deeper into the unknown that lies in our unconscious. Bourgeois’s drive and determination are what led her to finally get the success she deserved all along in her later years. Her life story and artwork encourages us to create like never before.

Grab yourself a new Arteza notebook, sketchbook, and set of Real Brush Pens and tap into the curiosity, courage, and confidence of Louise Bourgeois.

Are you feeling inspired yet? Interested in discovering even more Arteza products? Shop set below for your next creation.