In 2018, Dany Reyes was 34, working in a warehouse, and in crisis. He didn’t want this job for the rest of his life—he wanted to be a full-time professional painter. With his wife’s support, he took the leap of faith. The result is a striking body of work that melds graffiti forms, pop art, and comic book styles with celebrity portraiture.

Look for the “F” in one of Reyes’ paintings. It’s there, somewhere. Adding that and absorbing its message is what kept him going in the early days, when he wasn’t sure it would all work out, and it became a trademark. It stands for “Faith.”

Reyes’ artist bio begins with his birth in El Salvador, right in the middle of a civil war, that led his family to flee. They eventually made it to Los Angeles, where Reyes lived as a toddler until he was 15, being raised by his grandparents. Then he moved to Omaha, Nebraska, where his mother was living.

An elementary school friend introduced Reyes to drawing. By high school, he learned valuable knowledge thanks to some influential art teachers and friends, as his immersion in the world of art continued.

Reyes calls his style “perfect imperfection.” This name stems from his attempts at perfection, as in, not smudging pencil marks or dripping ink onto the work. It would frustrate him endlessly, but he came to terms with these “mistakes,” deeming it part of his unique art-making.

In this artist profile, Reyes talks about his lifelong relationship with art, his artistic process, what’s next for him, and more. 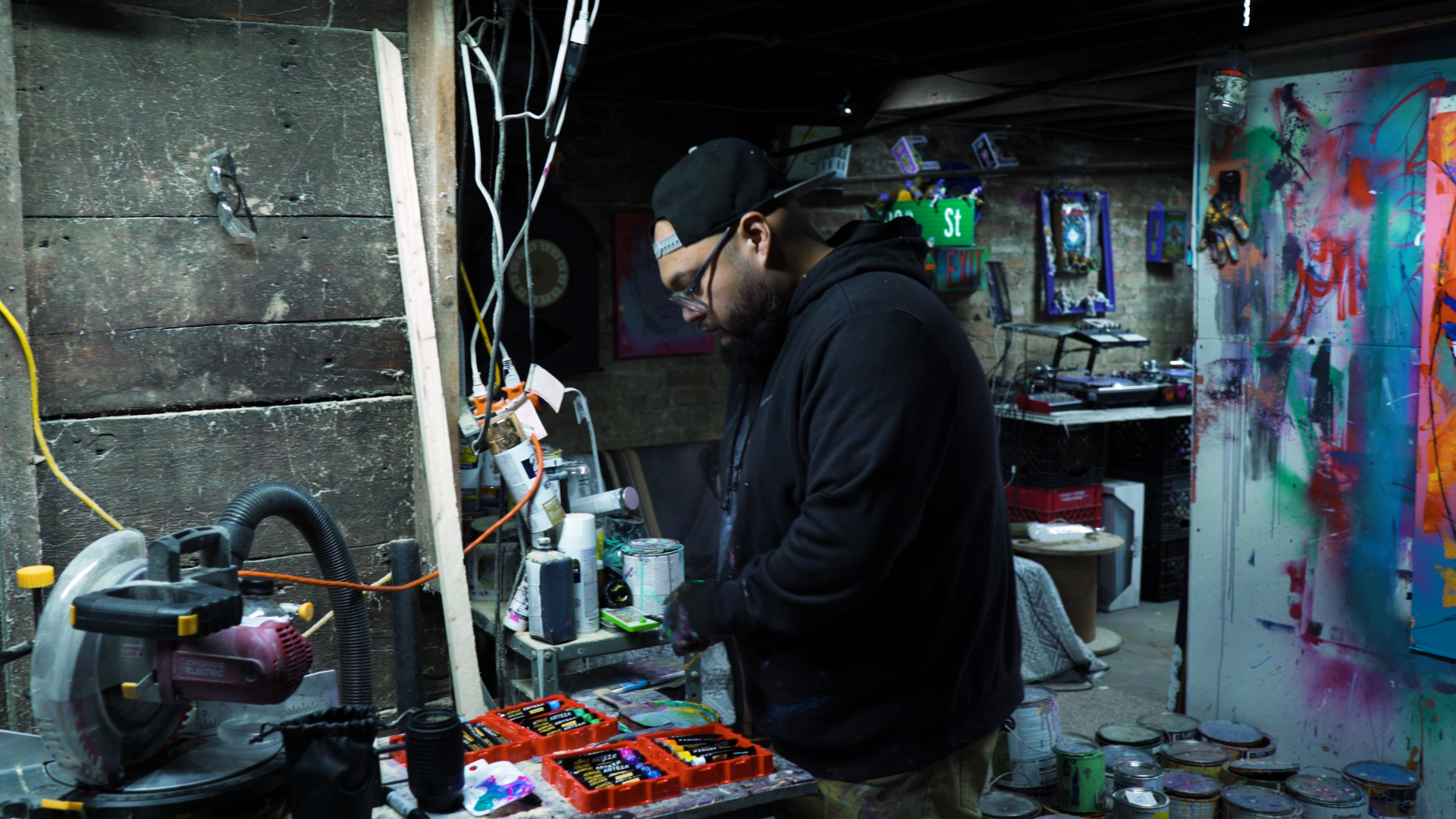 When was the moment you realized that you were an artist, and how did that make you feel?

I always drew, I always sketched things… And everybody would always say that I’m a good artist, and that I should become an artist, but I didn’t believe everybody.

Around first grade I couldn’t make friends very easily. But there was this kid who started hanging out with me, his name was Gabriel. And he said, “do you want to draw with me?” And I said, “yeah, sure.” I was just happy that somebody sat next to me and was talking to me… We would draw anything from cars, to cartoon characters…every time there was an assignment for class me and him were the top best drawings. It felt so amazing, it was such a feeling to draw, and have a friend, and so that’s what kicked it off.

Who was your first favorite artist?

A cousin of mine…had this book… it was one of those [how-to-draw] Marvel characters. I asked him if I could have it. In that book it showed you…proportions and all this stuff, and how to draw Spider-Man… It was a mixture of artists that did the little step-by-step parts of that book…but that book was…what I was highly influenced by.

Does graffiti inform your paintings?

It definitely does…I was getting into graffiti [in high school], and a kid from school asked me if I wanted to go out and paint on some trains with him—I had never done it before… I was always amazed how it was done… I learned so much that it actually turned me on to paint. 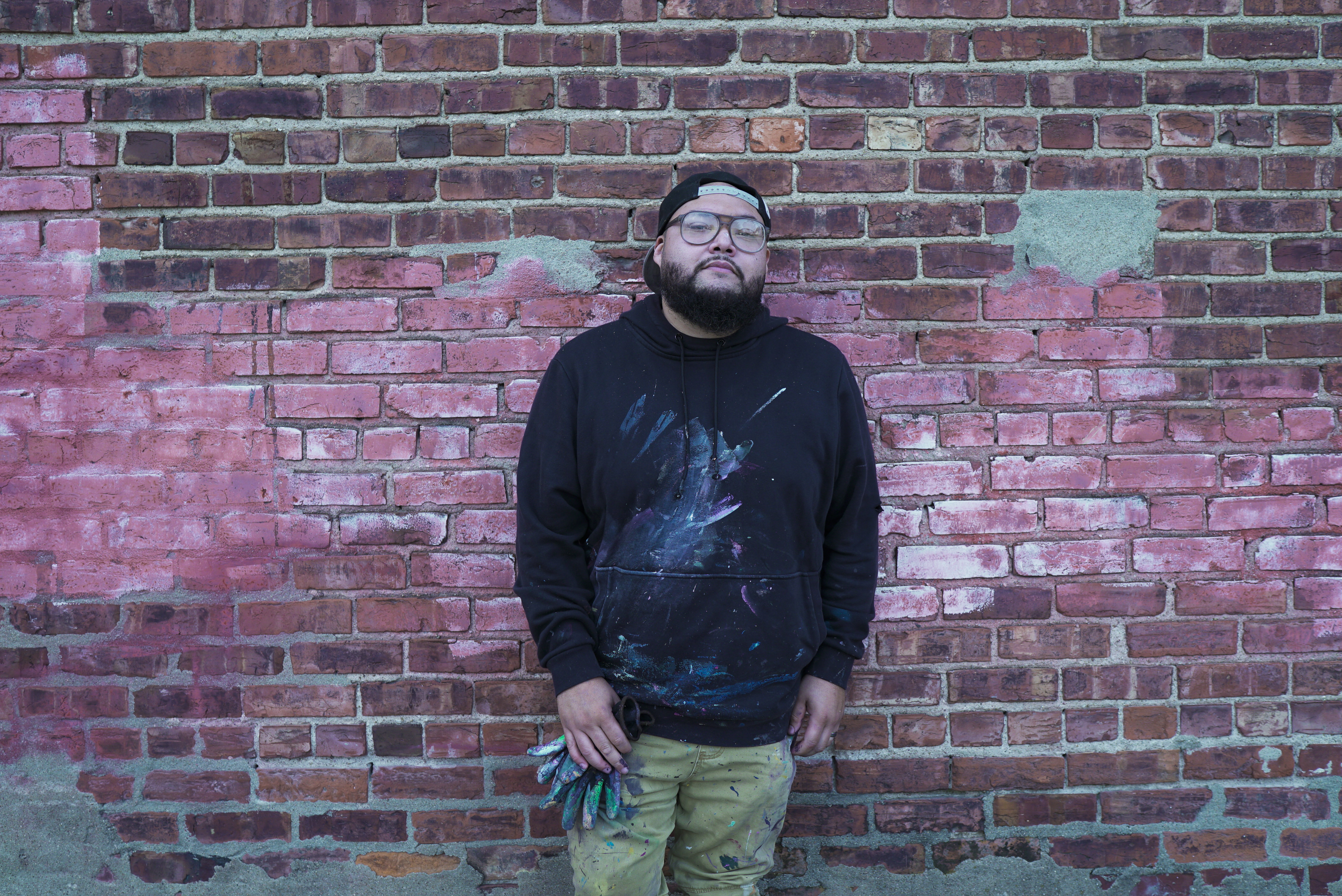 How have your life experiences informed your work?

When I started doing art, the whole purpose of it is because how free I started feeling, and how it freed me from my whole life situation.

Talk about some of your main artistic influences.

Pop culture and comic books. [With the latter], Todd McFarlane [he created] the “Spawn” comic books. I really like his artwork. Honestly, the darkness of what he drew and how he did it, [was] really cool. When he would draw Spawn, there would not be much detail on the face, but you could imagine what it looked like…

I stumbled upon a YouTube video, of this artist, his name is Voka …he’s a very big influence… When I saw him paint, and what he was doing, I started incorporating some of [it], with some of my graffiti stuff and the sketch-y look that I do. I started putting it all together, just kind of creating my own thing…and he calls his work “spontaneous realism.”

What is your artistic process both in the outer world and in your mind?

I may find a subject or somebody who I’m going to paint. And I usually go to my Pinterest, and I have a board of just all kinds of portraits and pictures and images that just appeal to me, or I’m [inspired by] watching a movie.

For paints I have two tables on each side of this wall… On one table, it’s more of the skin tones…grays, black, purple, darker purples... And then on the other table, it’s just all the other colors—red, purple, green…

So, I have them lined up, and my brushes, and then my iPad, from where I look at my images, for reference… I start my background first…I start dipping and…just splattering paint, and then just making it go everywhere. Sometimes I lay it down on a table, and it makes it a lot easier for me to do…I’ll go wash out my brush and I’ll bring another color in, and I’ll start blending and I have…a scraping tool that I bought at a hardware store…I grab that guy and I start scraping more paint on there. Then I just let it dry. And normally, I have another one that had already went through that process. So, then I grab this painting and put it up on the wall, and I leave the one that is drying, and I start sketching out what I’m going to draw. Normally, it’s only the face, that’s all I really like doing is a face portrait. And then facial expressions… Some people have really prominent features…It draws me [to them] … And then I start thinking, “what were they thinking when they were taking this picture?”

My mind just travels, and I don’t block it.

What was it like to quit your job to pursue art full-time?

I just started painting things and sharing them on social media. It was a very slow start, but I started to get attention and I started getting commissions.

I was also a DJ for a short period of time... with the DJ’ing, I made friends in clubs…and when they saw that I was painting, owners of these clubs and other businesses they said, “hey Dany, I didn’t know you did this, like, wow, pretty cool stuff.” [So, they asked] “hey, do you want to do an art show here? Do you want to do a live painting?” 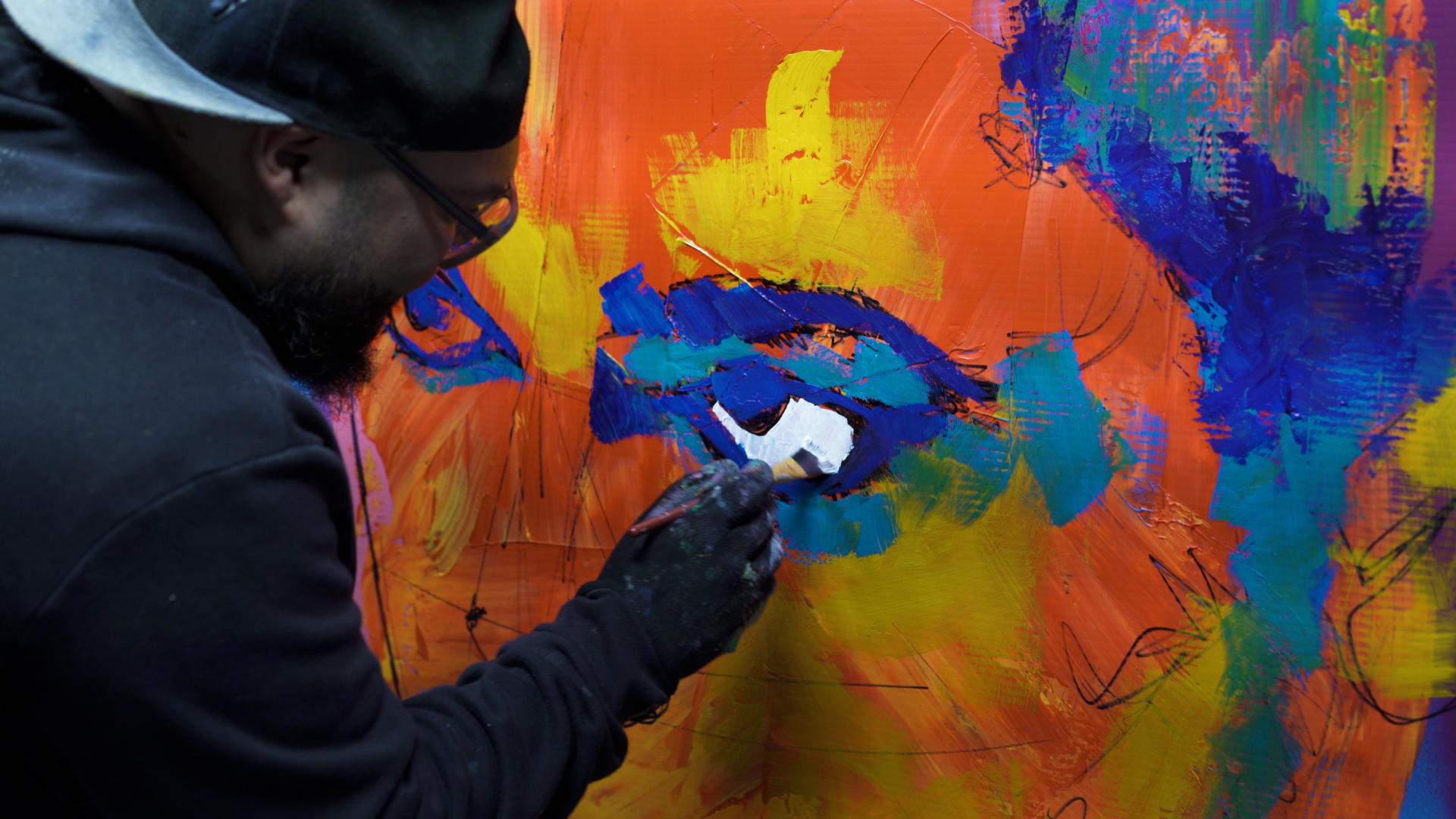 When you pick up that brush, you just keep going with it…and I know it’s hard, but forget the fear, forget about others judging you, forget the what ifs. Let go. Find your freedom, find your passion, in the canvas. Find it in the brushstroke that you’re doing. Just find a way to constantly keep believing in yourself. And just keep doing it. Don’t worry about how you’re going to reach, or anything like that, as long as you set your compass to the direction you want to go to, then your ship will sail that way. Just keep going.

Right now, I would call this my passion project. I started painting hip-hop artists… I really love that genre of music…especially the older stuff, the ‘80s… I wanted to do something that would commemorate these old rappers that everyone is forgetting about. It’s going to be a collection…I named it “Rappers Delight.” I wanted to educate some folks that have forgotten the history of hip-hop…

I love the acrylic paint. The colors are applied so vibrant, and then go on so smoothly. Honestly, I use them all the time...I really baby what I have, I put it on there for special effects that I just want to do. I don’t like wasting it. I know I can order more, but I really cherish using it in a specific way. To put it in simpler terms, it’s the salt and pepper to my steak.

Are you feeling inspired after reading about Dany Reyes? Make sure to shop set below for your creation