Artist Profile: The Magic of Morel

In 1991, a coup d’état took place in the Caribbean nation of Haiti, which led to marked destabilization. The coup led to the father of a toddler named Morel Doucet to be arrested, and compelled his family to obtain political asylum in the United States—leaving everything, including the family farm behind. After a harrowing escape from Haiti, they fled to Miami.

Doucet is now a successful artist, best known for his cutting-edge ceramic work, paintings, illustrations, and prints. His work has been exhibited in a number of prestigious institutions at home and abroad. As well as Art Basel Miami, one of the biggest art shows in the world. 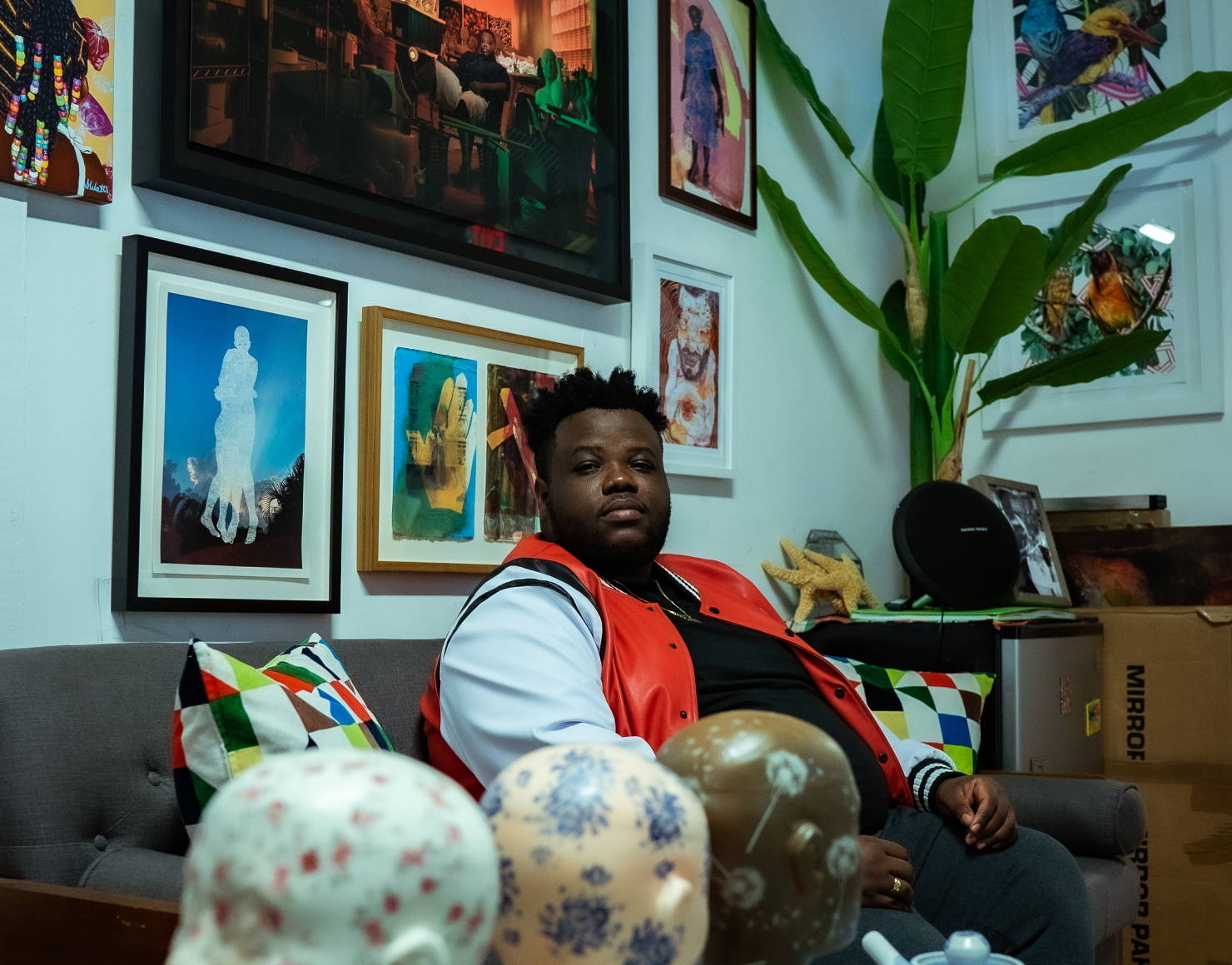 Doucet’s journey as an artist began in childhood while attending Miami’s Lake View Elementary School, when he was given a ceramics-themed art assignment. Specifically, he had to craft an animal from clay that he felt an affinity with, and he chose a snail—a creature that fascinated him.

Doucet was in the right place at the right time. The Miami of the 1990s was bursting with art enrichment and magnet arts programs, so he had the support of the community in his endeavors.

He would never lose the profound impressions provided by his birth country, especially the natural world, whether it be the earth of his grandfather’s farm, the landscape colors, or the nature-rooted spiritual practices. As his artistic journey progressed, the tribulations of the African diaspora would become a major theme in his work.

Doucet graduated from Miami’s New World School of the Arts with the Distinguished Dean’s Award for Ceramics. Then he received a BFA in Ceramics with a minor in creative writing and concentration in illustration from the Maryland Institute College of Art.

In addition to his artistic pursuits, Doucet is an art educator, holding the position of Curriculum and Tour Coordinator at the Institute of Contemporary Art in Miami. One of his primary goals here is to instill art appreciation in youngsters of color. He also officially fosters the museum’s partnership with Toussaint L’Ouverture Elementary School. 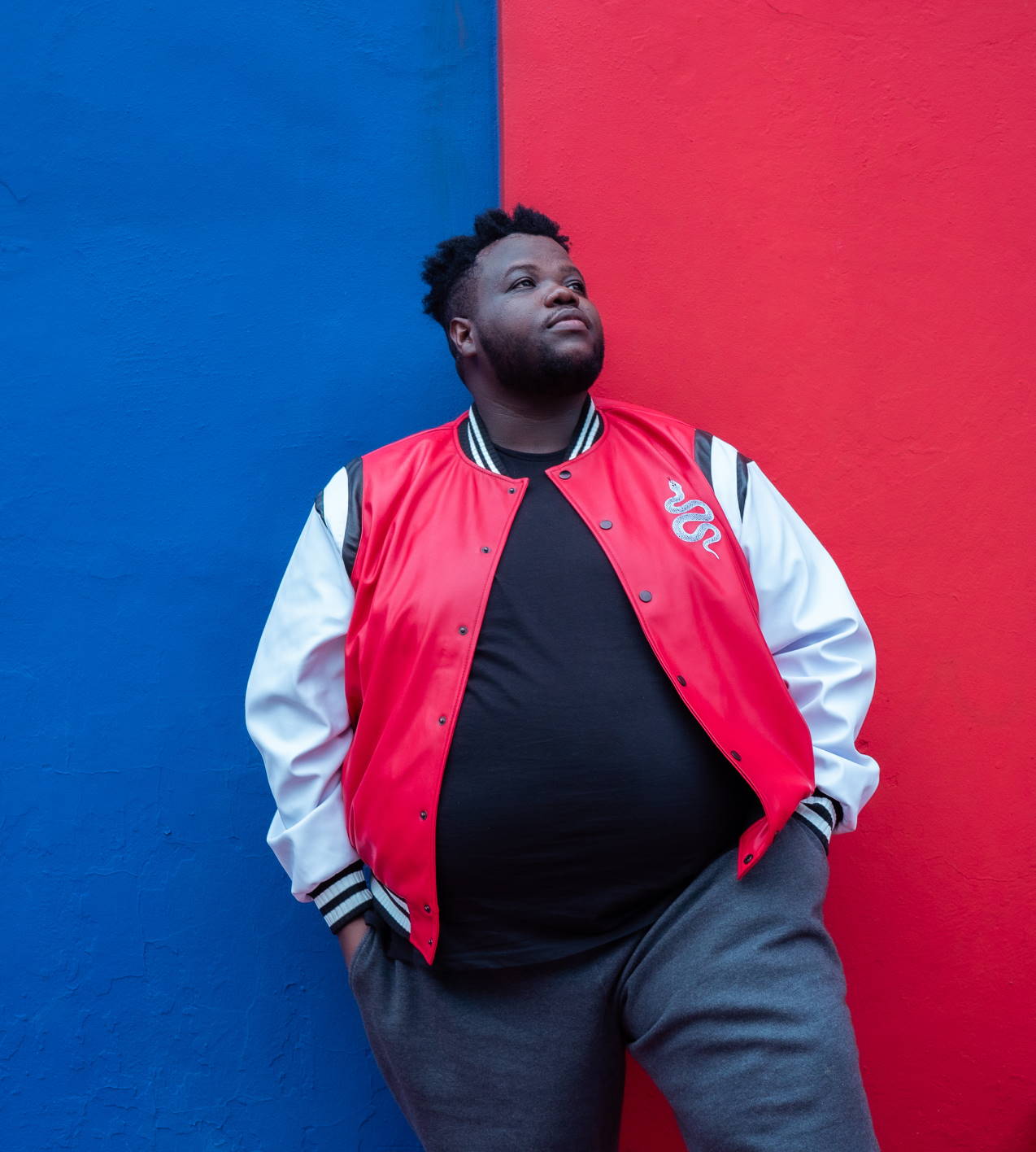 His first solo exhibition, “White Noise: When Raindrops Whisper and Moonlight Screams in Silence,” displayed from October to December 2019, was a tour-de-force distillation of Doucet’s major artistic themes. Doucet poured himself into research and exploration to realize the works.

After graduating from college and returning to Miami, Doucet was shocked at the state of his adopted home. Sea levels were rising. Red tide became a scourge on the shoreline. And gentrification had local people of color being moved out of locales like Little Haiti. And though these white porcelain figures featured in “White Noise” are made of the same material as fine china, they conveyed a far different message. The bodies of the figures are mostly identical, but where a head would be are a series of familiar and unfamiliar symbols. The concept of “colorism” is strong here. “Colorism” is a kind of denial of “blackness,” both socially, as well as physically with skin bleaching. This trend is widespread across the Caribbean. Also, ceramic is fragile, and Doucet connects that to the fragility of being black in America. 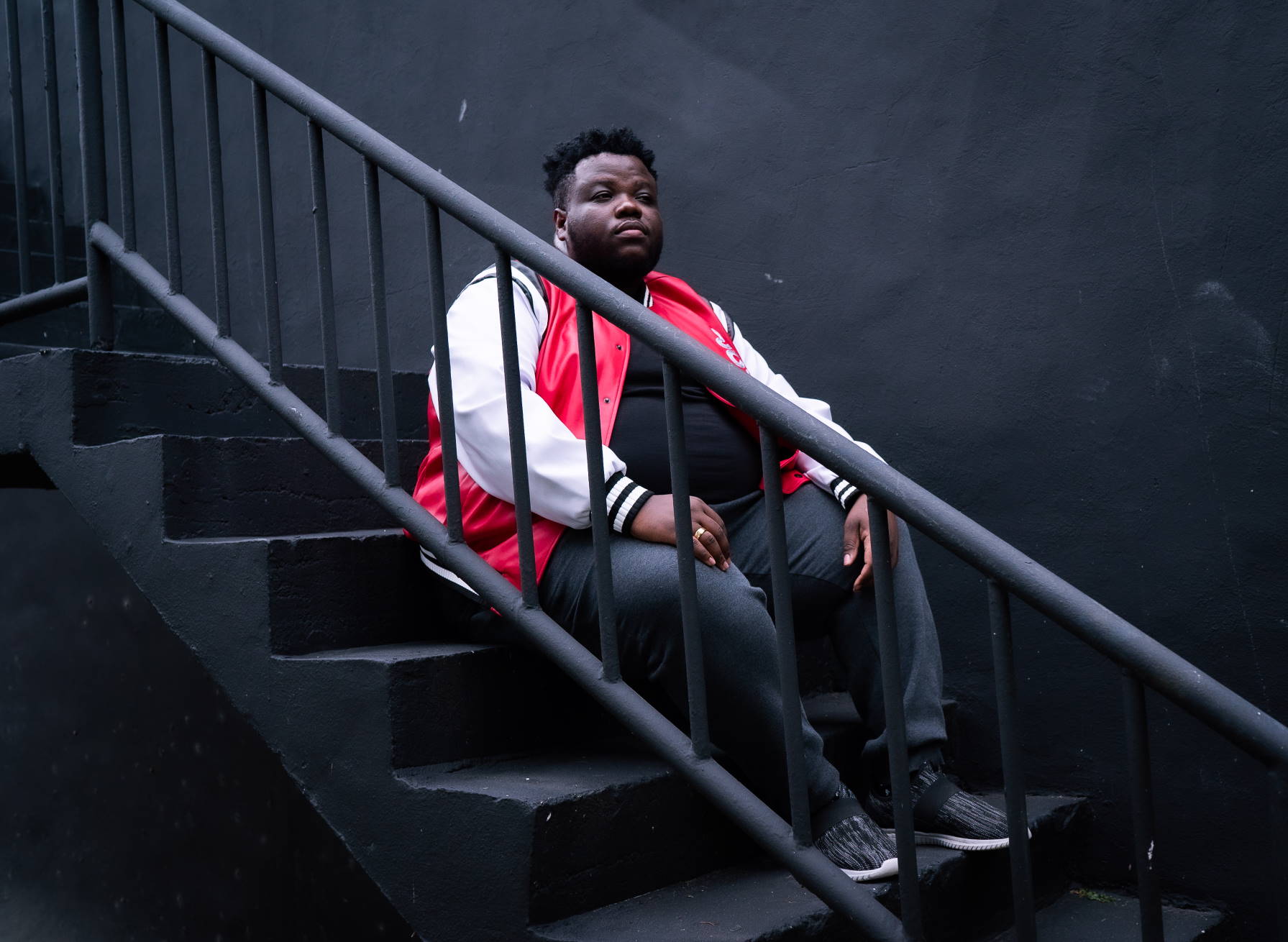 Another recent exhibition, “The Dirt Beneath Our Nails Still Pray to the Midnight Sun,” was a display of Doucet’s drawings. The mixed-media pieces represent residents of the following Miami neighborhoods: Allapattah, Carol City and Overtown. Morel combined charcoal with branches, leaves and pinecones (he gathered from those neighborhoods) to create this collection. 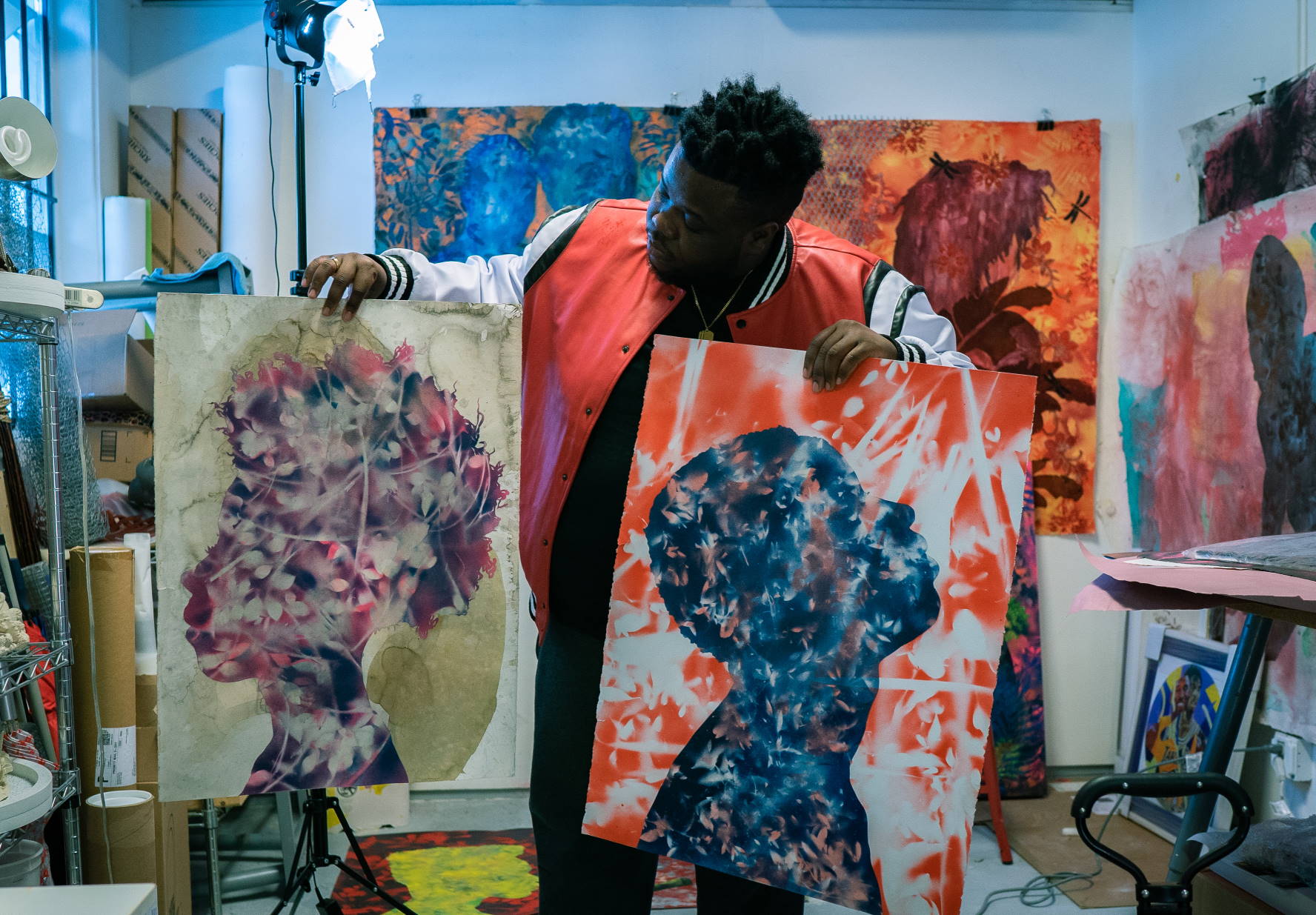 Below, in a Q&A, Doucet explains his artistic self and his work in detail, covering theme, the meaning of art, the act of artistic creation itself, inspiration, advice to other artists, aspirations, and more.

How would you describe your art?

I would describe the work that I make as a double-edged sword; it’s a celebration of nature while reminding the viewer of its complicity in the dying environment.

What is an artistic movement you associate with your work?

I would associate my work and artistic process with Afrofuturism.

Why do you make art?

My work explores the cultural disparity of self-realization, assimilation, and transnational identity as a Haitian immigrant. Using direct or implied human figures, I explore narratives of vulnerability, isolation, and alienation within various cultures across the globe. Within the vocabulary of indigenous art and my dreams, I create whimsical forms, resulting in a diary of self-mythology.

These exchanges allude to a larger conversation about sea-level rise, environmental pollution, and the displacement between descendants of the African diaspora and their physical environments. Through intensive, detailed labor, my work mimics the current state of Black fragility. I employ ceramics, illustrations, and prints to examine the realities of climate- gentrification, migration, and displacement within the Black diaspora communities. In addressing these issues, I merge my Afro-Caribbean culture with flora and fauna and draw from the concerns of the collective consciousness of my community.

In my quest to illustrate the impact of climate-gentrification, I present work with visual impact and sensitivity—and draw inspiration from the indigenous cultures of the Amazon, Aboriginal people of Australia, and the Yoruba tribe of West Africa.

What’s a life experience that set your path as an artist in motion?

My art teacher from Lakeview Elementary School set my artistic path in motion… Ms. Goldman encouraged my mother to [have me] audition for the Visual Arts Magnet Program at Rainbow Park Elementary; this was the start of my artistic journey and path towards becoming the artist I am today. The Magnet Art Program took my raw talent and cultivated it, molding and shaping my artistic gift with art’s fundamental principles.

What’s the first artwork you ever collected? What artwork do you covet today?

My first artwork ever collected was an illustration print from Baltimore, MD based children’s book illustrator Shadra Strickland titled “Okra.” The piece depicts two young African American girls as the subject matter, which brings the artist Strickland back to her childhood in Georgia and the foods that comforted her. The original piece was painted in watercolor and gouache.

My most recent art acquisition is three textile pieces by New Mexico-based artist Molly Zimmer from her “Blooming Oasis” collection of fabric assemblages that cultivate the artist’s own sacred refuge of delightful floral abundance.

What is your most important artist tool?

My most important artist tool is a MacBook Pro Laptop; I wouldn't be able to sustain myself with my day-to-day operations and business without it. Many people don’t realize that being an artist is much more than doing physical work in the studio. Throughout the year, there are moments where 65 percent of my time has been spent on the computer answering emails, grant writing, answering magazine questionnaires, and doing interviews for publications.

My artist studio is a living archive of present, past, and future ideas in various completion modes. I need to see my thoughts and planning stages physically in front of me. I keep water bottles for hydration, the ice on 75 degrees because it’s Miami, my sketch of notes, and air purifier.

Currently, I am working on a body of work titled “Water grieves in the six shades of death,” which is a series of mixed media drawings that examine the realities of climate-gentrification, migration, and displacement within South Florida’s Black diaspora. The title is rooted in magical realism, juxtaposing water as a body containing historical trauma, cultural dissonance, and active memory.

What role does the artist play/have in society?

The role of the artist is to document and capture the various moments of their culture and time.

Why does art matter?

Art matters because it’s the common thread that binds humanity; it transcends culture, music, and tradition. At its most basic principle, it’s a universal symbol of emotions, communications, and placement.

Inspiration often eludes the artist; what do you do to reconnect with the muses?

Time is elusive to the artist; it’s ever-changing and confirmed at any given moment, especially during the studio and production process. To reconnect with my muse, I seek an outward investigation of nature. The land, the water, and sky hold infinite possibilities.

What’s a new style or art medium you’d like to tackle?

I would love to take a deep dive into the realm of filming, directing, and screenwriting. My academic minor is in creative writing; I would like to use this skillset in that capacity.

What’s the best piece of advice you ever got that you find yourself sharing with other artists?

Slow and steady wins the race; think about your artistic career’s longevity, and don’t go seeking instant fame and notoriety. Be wary of collectors seeking to flip your work earlier on your career in the secondary art market.

We agree; he absolutely is, Mary! It was a pleasure to work with him. Thank you for reading this article!