Inspired by death, Damien Hirst has made a successful career as an artist by demanding audiences face their fears of death head on. Known for being one of the wealthiest artists alive, Hirst is determined that art can change the world. Hirst works with a wide variety of media, ranging from assemblage/collage of medical equipment to large bronze sculptures; however, his most well-known works are from his ongoing dot painting series and his series of animals captured in formaldehyde. Hirst’s artistic process is akin to scientific practices, where they must kill their subjects to examine them further. One thing's for sure about Damien Hirst, he won’t go unnoticed. 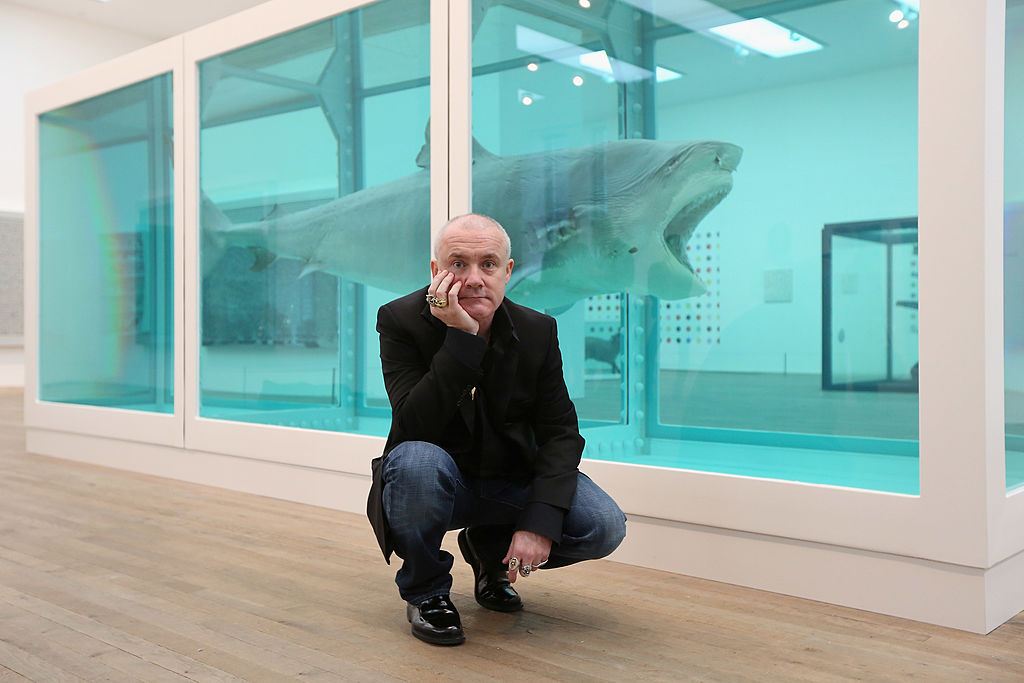 Artist Damien Hirst poses in front of his work “The Physical Impossibility of Death in the Mind of Someone Living” in the Tate Modern gallery on April 2, 2012 in London, England. Photo by Oli Scarff, Getty Images

Damien Hirst was born on June 7th, 1965 in Bristol, and later grew up in Leeds, England. He went on to move to London to get a BA in Fine Arts from Goldsmith College in 1989. Hirst was part of the Young British Artist (YBA) movement in the late 1980s and early 1990s, alongside Tracey Emin and Sarah Lucas, YBA took the contemporary art scene by storm. By 1995 Hirst was awarded the Turner Prize and soon became a household name. Since his rise to fame, Hirst continues to astound audiences across the world with his breathtaking, and often fear or curiosity-inducing, sculptures, installations, and paintings.

Hirst’s early fascination with medical supplies led to many of his assemblage/collage pieces that display disposable medical garments and supplies. As an adult, Damien Hirst found himself (and still finds himself) inspired by The Beatles and the Sex Pistols. His admiration of how the Sex Pistols were able to change the world in less than three years time, and his ever-growing fascination of prescription pills led to some of his more pharmaceutical-centered artwork, such as “The Sex Pistols” (1996-1997), a four part collage of medicine cabinets and pharmaceutical packaging.


The Death that Surrounds Us

Damien Hirst’s artwork demands a reaction. Hirst’s work focuses on death, decay, love, and medicine through wet media, like paint, as well as bronze, assemblage, collage, sculpture, drawing, and installation. His fascination with the examination of death can be seen in many of his works. “The Physical Impossibility of Death in the Mind of Someone Living” (1991) forces the viewer to face a tiger shark (preserved in formaldehyde) head on. Sharks in American culture symbolize death to many, especially since the blockbuster “Jaws” was released in 1975. The shark featured in Hirst’s celebrated piece is displayed in three parts, with space in between each vitrine, for the viewer to study both the interior and exterior of this jarring representation of death.

Hirst has always associated water with death, which is why he considers formaldehyde to be the ideal medium for preserving and displaying animals. After being widely recognized as one of the most successful of the YBA’s artists. Hirst went on to further explore his fascination with death and aging through his works consisting of used cigarette butts, pills, and disposable medical supplies. His views on cigarette smoking became life-sized with his 1996 piece “Crematorium”—this large-scale ashtray made a statement, which Hirst would later go on to oppose; “I didn’t used to trust people who didn’t smoke, now I don’t trust people who do.” 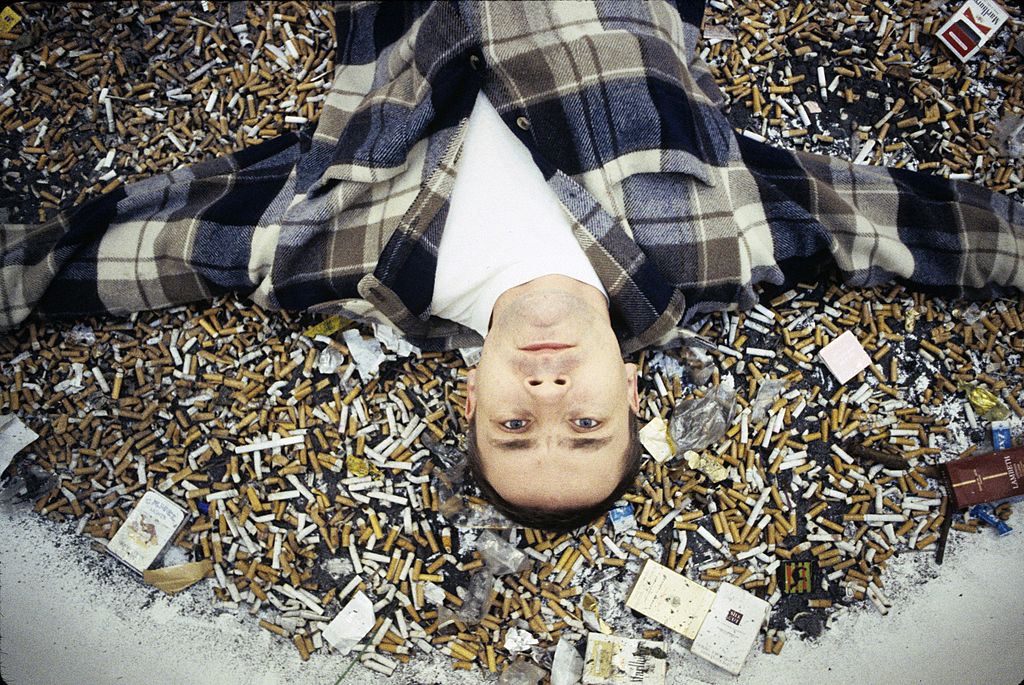 British artist Damien Hirst poses for a portrait with his artwork at his exhibit titled “No Sense of Absolute Corruption” at the Gagosian Gallery in SoHo, New York City, New York in May 1996. Photo by Catherine McGann, Getty Images

Hirst’s 2017 documentary “Treasures from the Wreck of the Unbelievable'' showed his work being discovered and pulled from the depths of the ocean and presented to audiences as ancient treasures. While some may call his work deceitful, you can’t ignore the true brilliance it is founded on. Water, which Hirst deeply associates with death, was also the foundation of his most recent installation, quite literally.

“Mental Escapology” shared over 40 works of Hirst’s and exhibited over four locations in St. Moritz, Switzerland from January 23rd to February 28th of this year. The 12-foot-tall sculpture titled “The Monk” exhibited on the center of frozen Lake St. Moritz. This was Hirst’s first time exhibiting on a lake, as well as the lake’s first exhibition, making this outdoor exhibition a remarkable first for all parties involved. Hirst’s anatomically correct and eye catching, 21-foot-tall sculpture “Temple” also exhibited outdoors nearby at Waldhaus Am See.

Hirst recently concluded his five-month long exhibit titled “End of a Century” at Newport Street Gallery in London. While the show concluded March 7th, a thorough walk through with context from Damien Hirst can still be found on his instagram @damienhirst. “End of a Century” included several preserved animals, many dot paintings, pill cartridge collages, medical centered assemblage pieces, and more. Damien Hirst and his team of assistants recently finished a painting series called “Cherry Blossoms”. A limited number of Damien Hirst’s prints of “Cherry Blossom” were sold by the artist this past March.

From June 1st, 2021 to January 2nd, 2022, Hirst will be unveiling his recent painting series “Cherry Blossoms” at The Fondation Cartier in Paris, France. Similar to several of his other paintings, many of the paintings that make up “Cherry Blossoms” are composed of countless dots collected on large canvases. Together, these thousands of dots resemble beautiful cherry blossoms. This work references impressionism and action painting with a modern approach. In addition to painting dots, cherry blossoms, creating paintings with real butterflies, and sculpture, Hirst also frequently grounds himself by creating spin paintings. 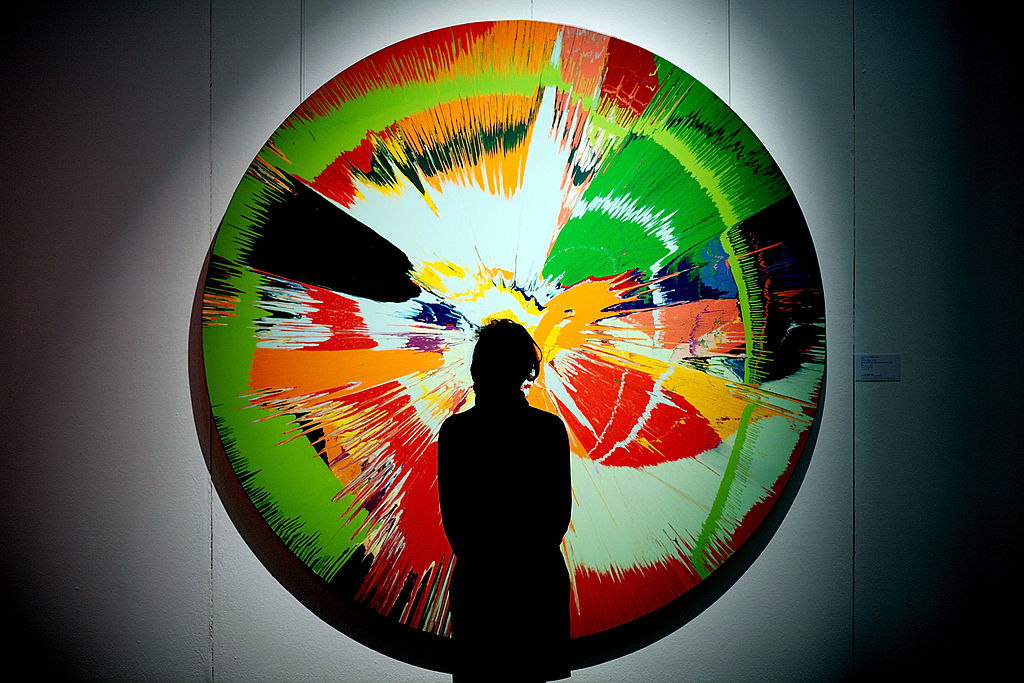 While it may be controversial, Damien Hirst’s work is truly unforgettable. Hirst’s immersive installations and decaying collages remind us that while death is scary, it is also unavoidable, and therefore is worth examining via the arts. Whether you find yourself marveling at one of his colorful spin paintings, nostalgic medical cabinet displays, or life-sized sculptures, you’re sure to be impressed by the breadth of knowledge Hirst bestows upon each of his works of art. Delve even further into the work of Damien Hirst via his Instagram, Twitter, and website. Damien Hirst’s artwork reminds us that we can find comfort, stillness, and beauty in even the most uncertain areas of our lives.