Tracey Emin’s artwork speaks volumes to audiences all across the world. Emin creates paintings, neon, drawings, videos, sculptures, and is also known for her installation pieces and embroidered work. While Emin is a truly versatile contemporary artist, she’s deeply inspired by artists born several decades before her time, specifically Edvard Munch and Egon Schiele. Her unique and authentic approach to creating is both admirable and inspirational; especially for artists that gravitate towards creating primarily for the therapeutic process, rather than the end result. 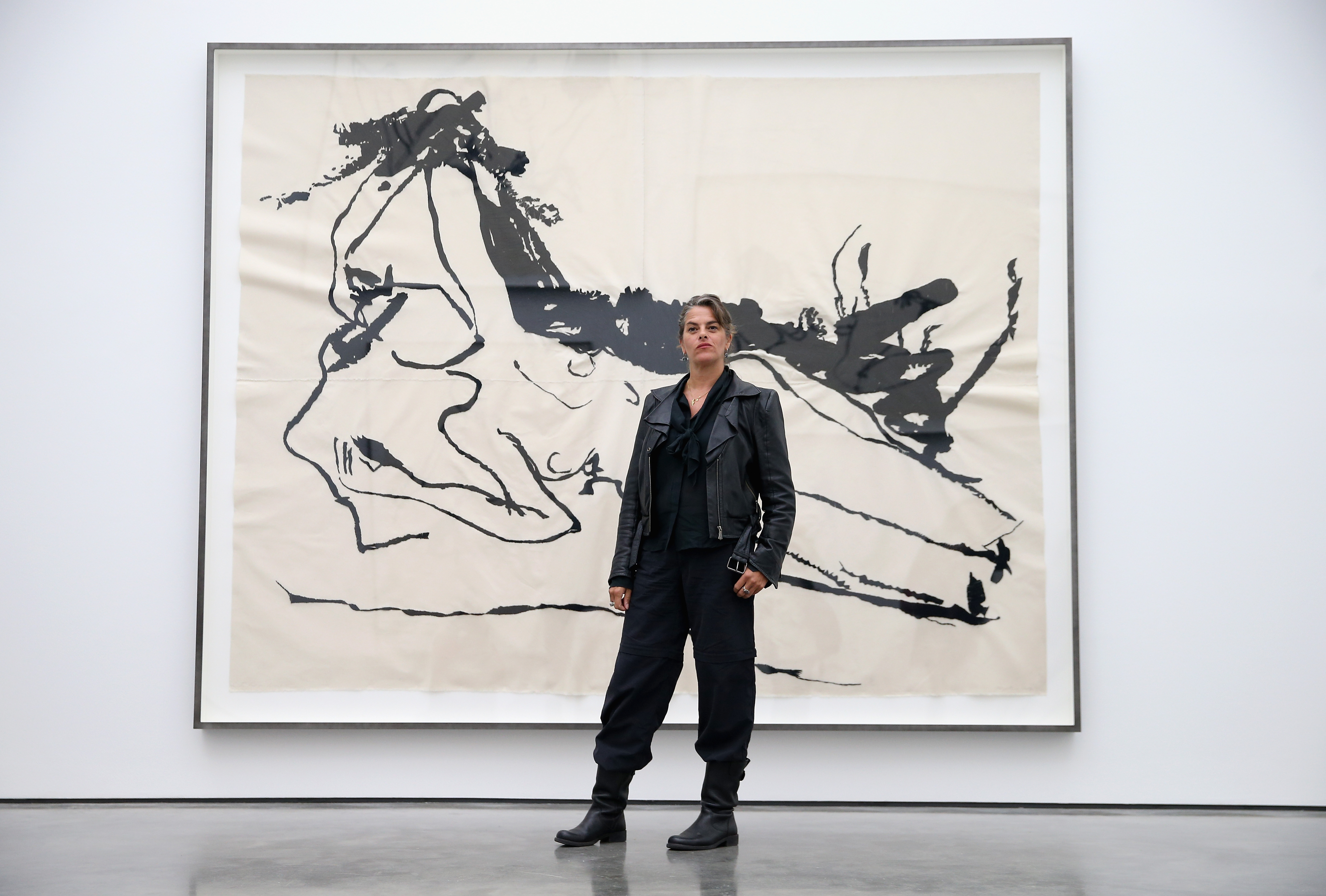 Artist Tracey Emin poses in front of her work as part of her “The Last Great Adventure is You” Exhibition at the White Cube Gallery, Getty Images

Sketching Out the Life of Tracey Emin

Tracey Emin was born a twin on July 3rd, 1963 in Greater London, England. She grew up in Margate, England where she dropped out of school at the age of 13 and later moved to London at 15. By the age of 17, Emin was attending Medway College of Design, where she studied fashion design. Soon after, in 1986, Emin earned her fine arts degree from Maidstone College of Art. Determined and thirsty for knowledge and experience, Tracey Emin would later go on to get her master's degree in painting from the Royal College of Art.

At the Royal College of Art, Emin won a scholarship to travel, which changed her life completely as an artist. Abroad, Emin learned how to paint (with oils) and how to stretch canvas. She went on to create stunning works of art with an impressive range of media and became known for using her own life experiences as the subject matter. World famous collector, Charles Saatchi, went on to discover Emin with his Young British Artists (YBA) movement in the 1980s, which really launched her career as a professional artist.

Self Reflection, Discovery, and Healing Through Art

In 1995, Tracey Emin became a household name after her intimate piece “Everyone I Have Ever Slept With (1963-1995)” was featured at the YBA show “Minky Manky” at the South London Gallery. Emin’s intimate installation revealed the names of everyone she had ever slept with featured on the inside walls of a tent propped up in the gallery. The names displayed for all to see (inside the tent) were of the people she had ever slept beside. Some names that were mentioned were the names of ex-lovers, her twin brother, her mother, and her two aborted fetuses. Emin’s need to present herself authentically on canvas, fabric, in neon, on paper, and even in bronze is what makes her such a revolutionary artist of our time.

Emin went even further, and took a more figurative route, with her artwork reflecting her slumber, when she created “My Bed” in 1998. This installation exhibited at the Tate Gallery in 1999 and went on to be nominated for the Turner Prize. “My Bed” was Emin’s literal bed, assembled when she spent four complete days in her bed. As Emin reflected back on her work in 2017, she noted that at the time she thought it was disgusting then she realized that her bed had probably saved her life—in that moment, she recognized she had created art. Without context some could dismiss “My Bed” and write off the dirty underwear, alcohol bottle, used condom-laden bed installation, but for Tracey Emin’s work, context is everything.

Emin dove even deeper when she wrote and published her handwritten autobiographical book “Exploration of the Soul” (2003). With each painting, neon, journal entry, sculpture, and drawing Emin demands self-discovery. The process which Emin paints is what makes her painting approach a transformative experience. Anytime Emin paints she pours herself deeply into the canvas until she feels satisfied, not by a physical standard, but at a spiritual level where Emin feels as though she has learned about herself through the process of creating her work. Emin has been known to scream, dance, drink, and yell while painting. The actual application of her paintings start with a sketch, before being passionately painted on with her full intensity. From her commitment to her craft to her approach to creating, one thing is for sure, Tracey Emin does not hold back. 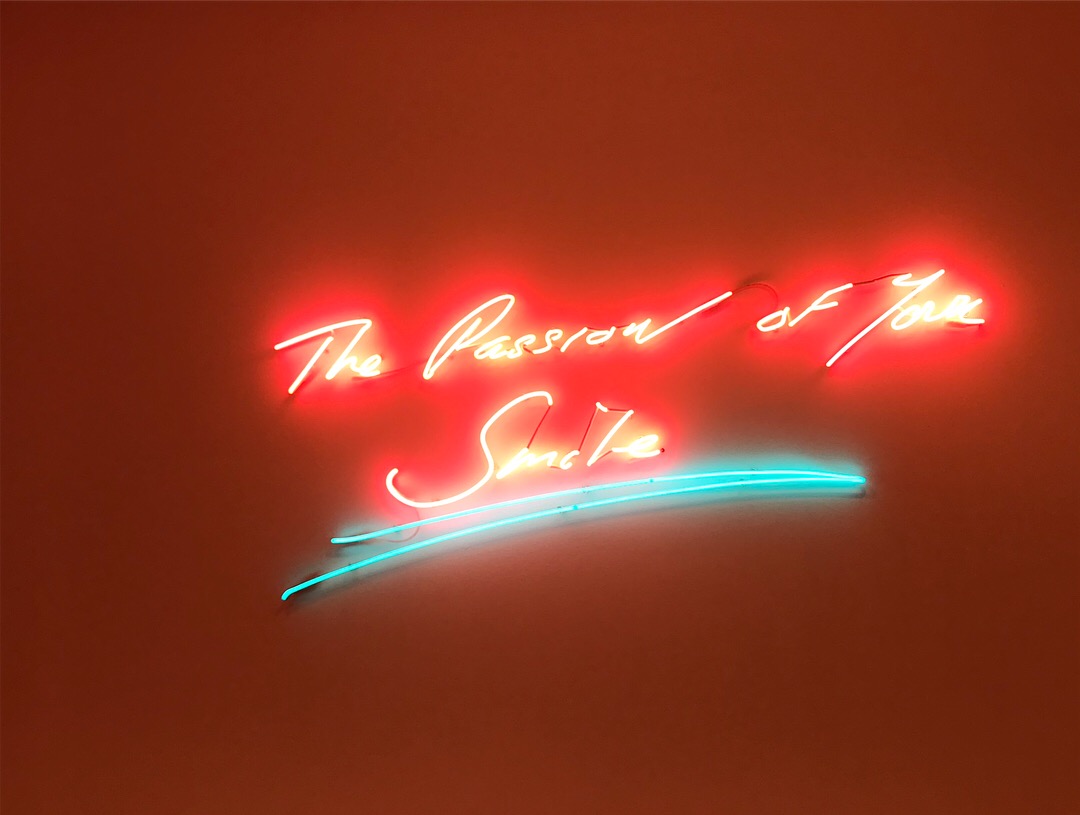 “The passion of your smile” Tracey Emin, image taken by Yanna Marie

Tracey Emin’s artwork was recently showcased at The Royal Academy of Arts and White Cube Mason’s Yard. From November 2020 to February 2021 “The Loneliness of the Soul” exhibition ran at The Royal Academy of Arts while only across the road “Living Under the Hunters Moon” ran at White Cube Mason’s Yard. The two exhibitions focused on very similar subject matter in completely different manners. “Living Under the Hunters Moon” featured a diverse selection of Emin’s self-portraiture centered artwork with a focus on being guided by the moon.

Emin suffers from acute insomnia, as a result she often finds herself painting throughout the night, artistically illuminated by the moon. The hunters moon, often referred to in folklore—sometimes called the blood moon, is a full moon which occurs in October or November. This moon phase was known for being the best time for hunters to hunt their prey. This exhibition shined a light on Emin’s admiration for Edvard Munch. Emin screened a film of herself cozied up at the end of the pier at Munch’s house. Displayed in a large, empty room, this film brought a calming yet isolating presence to the exhibition. Emin showcased her famous, bronze sculpture “The Mother” (2020) at this show; “The Mother” acts as a gift to Edvard Munch, whose mother died when he was a young boy. This sculpture is displayed in a room lit by Emin’s yellow neon which reads: “I made my way to you.” 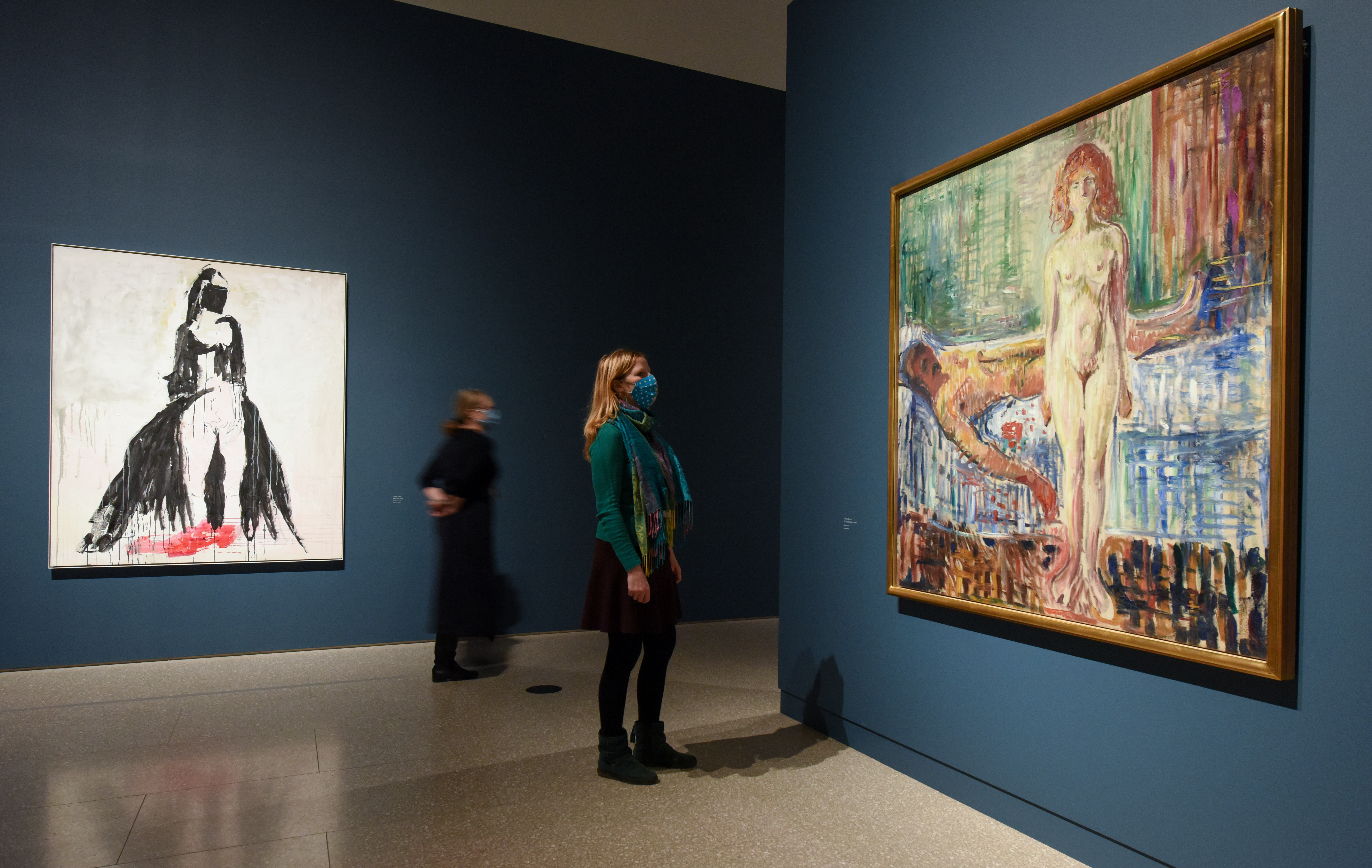 “Tracey Emin/Edvard Munch: The Loneliness of the Soul” At The Royal Academy Of Arts, Getty Images

“Tracey Emin/Edvard Munch: The Loneliness of the Soul” also paid great tribute to Edvard Munch. Munch had been Tracey Emin’s favorite painter since she was 17 years old, before she ever even studied painting. Emin fell in love with him as she studied his work meticulously. Emin and Munch’s work both touch on the same topics: heartbreak, jealousy, fear, sickness, aging, suffering, and loneliness, all through depictions of the female figure. Emin finds Munch’s self-expression to be wild, radical, and moving. “The Loneliness of the Soul” featured a selection of Munch and Emin’s paintings of the female body, primarily in oil, acrylic, and watercolor paints. Born 100 years apart, the connection between Tracey Emin and Edvard Munch is undeniable. While “The Loneliness of the Soul” exhibition has ended, The Royal Academy of Arts has an immersive virtual tour of the work available on their YouTube channel.

Tracey Emin is an inspiration to artists and women all over the world. The feelings that her work evokes lingers with you for several days, if not weeks. The somber yet loud colors, textures, and brush strokes of her paintings remind the viewer of the dark corners of their subconscious. Emin’s paintings and sculptures often feature text which delve the viewer even deeper into Emin’s mind. Tracey Emin’s work consists of a brilliant balance of abstract and figurative, disturbing and comforting, and traditional and modern, making her a remarkably well-balanced contemporary artist. Take the time to familiarize yourself with more of Emin’s work, especially in comparison to Munch’s to really understand the intensity and foundation of Tracey Emin’s paintings and sculptures. 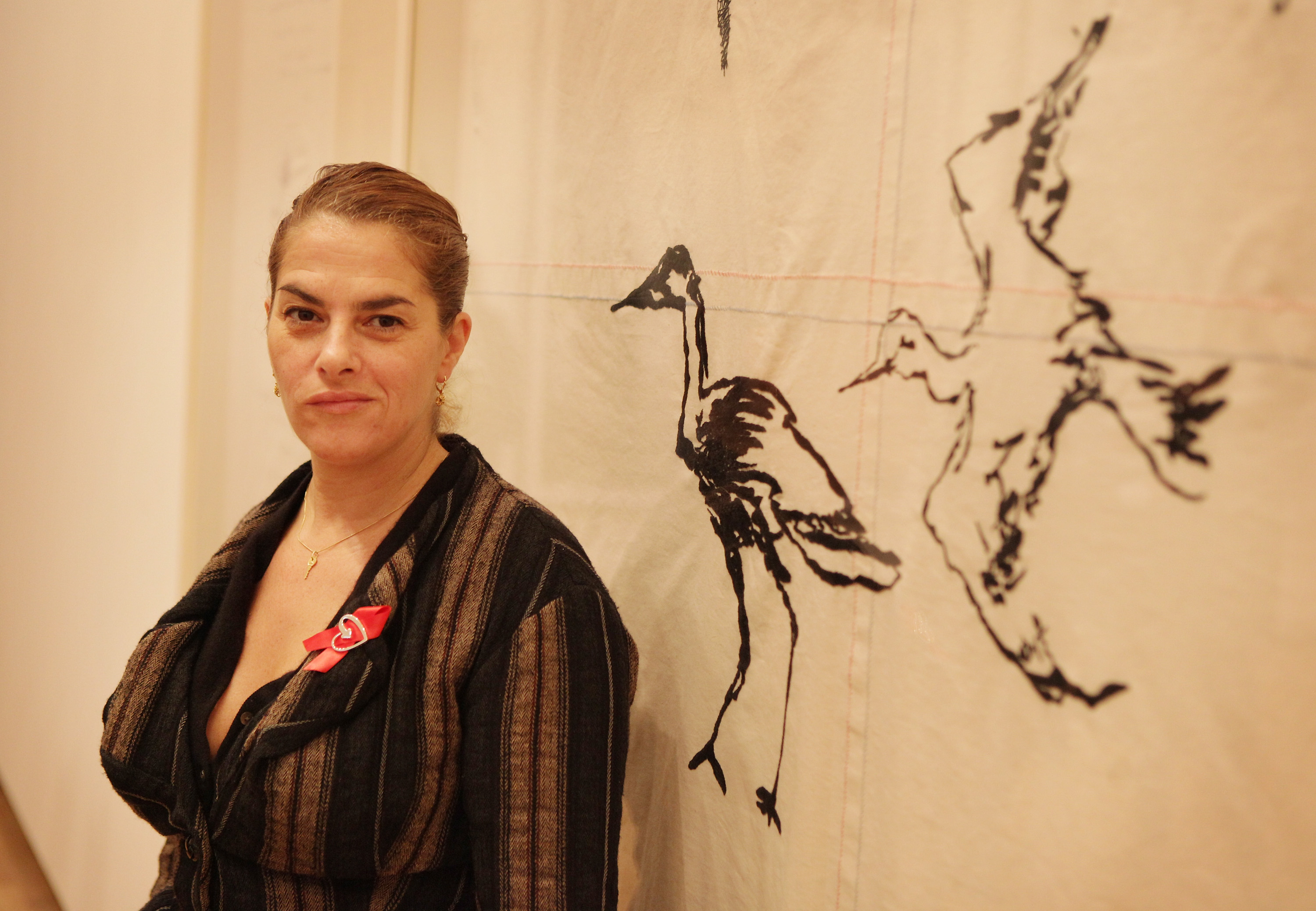 Artist Tracey Emin stands in front of her new painting entitled 'Throw Yourself at Anyone, 2009' at the Royal Academy of Arts 'Earth: Art of a Changing World' exhibition, Getty Images

Regardless of the critiques or judgement of others, Emin continues her artistic journey of  self-discovery because at its core it is for her own healing. In the #MeToo era we currently find ourselves in, Emin is finally getting the recognition she deserves. It seems our western society, and the world at large, is becoming more interested in female narratives, particularly those rooted in healing from trauma and self-acceptance, in all art forms. This emerging encouragement for women to fully claim their bodies and their sexualities is making it possible for women everywhere to share their truths, whether that be on canvas, in neon, through literature, spoken word, actions, film, or sculpture.

That must’ve been an exhilarating and breathtaking experience! We hope you had a wonderful time.

Got to see some of her work in person in Melbourne! Amazing.