Olafur Eliasson is changing the world as we know it; through his work addressing the self, movement, playfulness, as well as climate and political change. Eliasson has exhibited all across the world, and thereby changed countless observer’s lives, or as he calls them, participants. Eliasson invites the spectator to become the creator as they immerse themselves quite literally, into his artwork. His portfolio includes glass work, sculptures, paintings, architectural projects, installations, and films. Olafur Eliasson’s installation pieces frequently involve the five senses, to evoke an emotional reaction from the audience, and leave an everlasting impression. 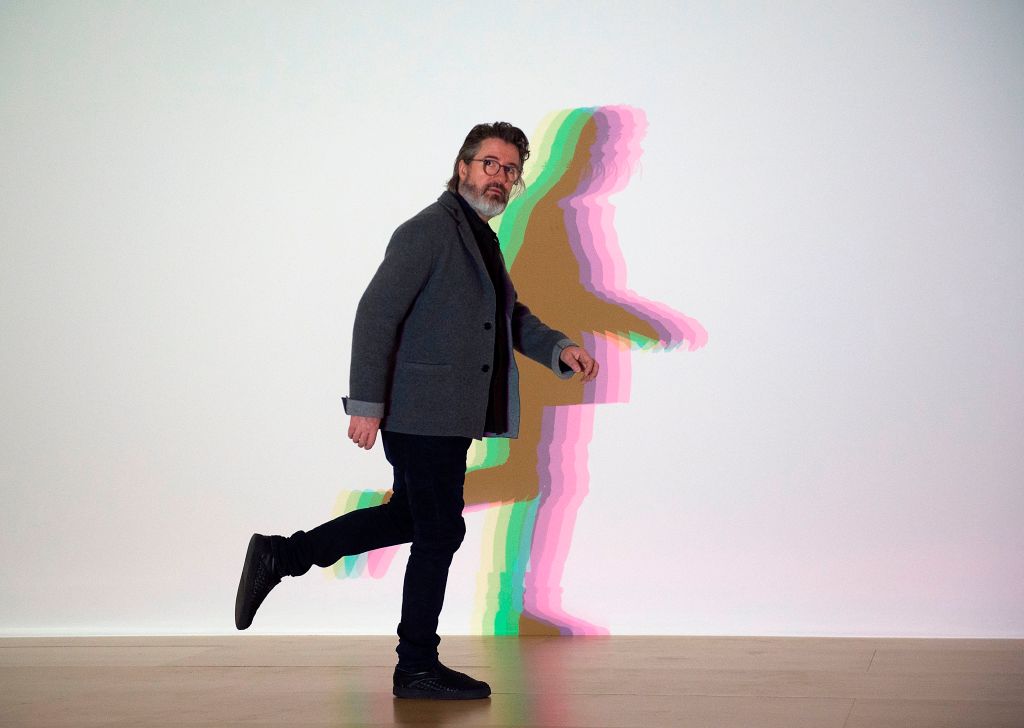 Danish-Icelandic artist Olafur Eliasson poses in front of his artwork “Your uncertain shadow” during a presentation of the “Olafur Eliasson: In real life” exhibition at the Guggenheim Museum in northern Spanish Basque city of Bilbao on February 13, 2020. Photo by Ander Gillenea/AFP via Getty Images.

Born in 1967, Eliasson was brought up in Iceland and Denmark. As a child of divorce, he was raised by his mother. He would send his father drawings, and join him on artistic adventures whenever he got the chance. His father was also a visual artist, which inspired him at a young age. Since his father never had much success monetarily, Eliasson learned he didn’t have to be successful in order to be a quality artist. From creating abstract doodles as a child, Eliasson went on to attend Royal Danish Academy of Fine Arts in 1989 to 1995. Prior to attending art school, he experienced something that changed his perception of reality.

In 1983, Eliasson was passing by a store and saw people acting as mannequins dancing like robots—this blew his mind. Eliasson has described this moment as feeling as though he had ‘seen the light’. After that transformative experience, he got really into dancing, he and his friends loved doing the robot at social gatherings and events. The robot (dance move) taught him about physicality and space, which hugely impacted him as a person, and of course his artwork. In 1989, he moved from Denmark to Germany, leaving everything behind to pursue his craft. He witnessed the Berlin Wall coming down, and watched as people poured through the foggy air towards him; this liberating moment resonated deeply within him.

Olafur gained traction from his works “Beauty” (1993-2020) and “Moss Wall” (1994-2021). “Beauty” (1993-2020), which is comprised ofdrizzling water, a spotlight, and the viewer, encourages the participant to rethink their definition of rainbows. A rainbow appears for the observer, however it's a truly unique experience, since it is completely dependent on where you are standing. Two people who stand in the same room viewing “Beauty” will see a different rainbow, which makes this piece both a personalized experience and conversation starter. Eliasson’s work, if nothing else, provokes conversation and thought.

“Moss Wall” (1994-2021) is exactly what the title suggests, a wall which consists of reindeer moss, a lichen found in Iceland, woven into a wire mesh and mounted on a gallery wall. This lively piece fills the space with its fragrance, and changes in color as it ages. “Moss Wall” was featured in Olafur’s recent exhibition, “Olafur Eliasson: In real life” at Guggenheim Bilbao, in Bilbao, Spain from February 13th, 2020 to April 4th, 2021. While experiencing this piece in person is more favorable, Eliasson offers a brilliant digital portfolio on his website, which includes stunning shots of “Moss Wall”.

1995 was an important year for him, since he moved to Berlin and founded Studio Olafur Eliasson, which he works in to this day, with his ever-growing team of collaborators. Another memorable piece to come from Eliasson in the 90s was “Room for one color” (1997). This vibrant display is an optical illusion that the viewer experiences through color perception. Eliasson discovered that monofrequency lamps mounted at the ceiling of a white room produce a yellow light, that also reduces the observer’s range to strictly shades of black and yellow. Eliasson deliberately did not include any objects for the viewer to engage with in the space.

Bringing his light-centered artwork to a global level, Eliasson (and Frederik Ottesen) created “Little Sun”(2012), a piece of art designed to enhance the lives of folks from all across the world. Little Sun is a non-profit organization and a product that provides sustainable and affordable, clean lighting to those across the world who otherwise would be without. Since it is estimated that one in eight people in the world do not have access to energy, Little Sun is making a huge impact on countless communities. Each Little Sun portable, rechargeable lamp is made of a solar panel, an LED light, a rechargeable battery, a necklace strap, and an inviting sunflower design. 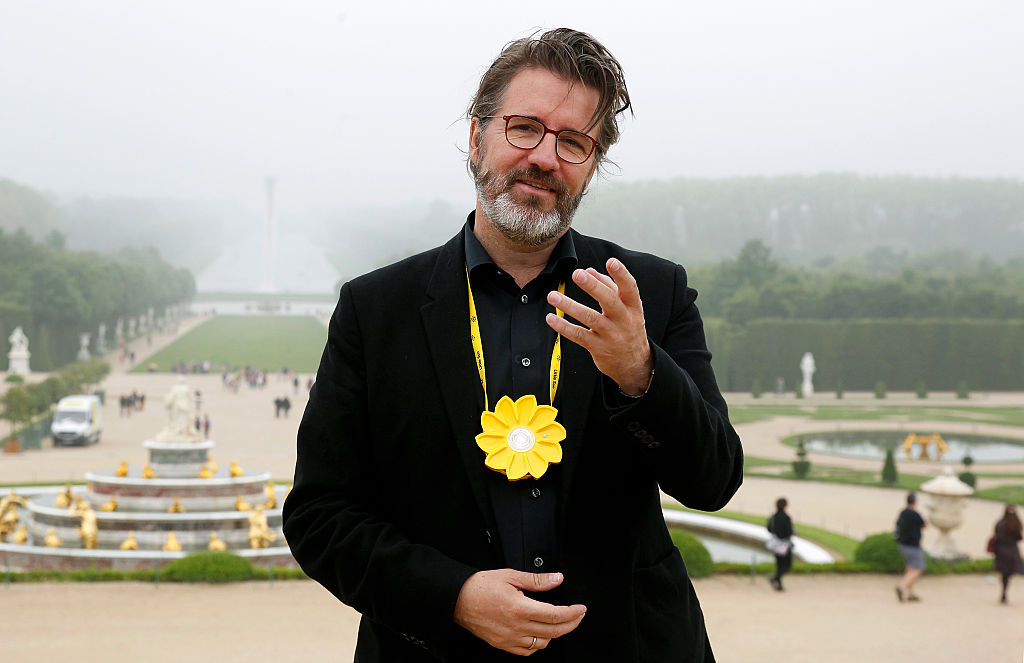 Artist Olafur Eliasson poses in front of his artwork named “Waterfall” at the opening of the exhibition of his works in the gardens of the Chateau de Versailles on June 6, 2016, in Versailles, France. Photo by Chesnot/Getty Images.

Little Sun is both solar and human energy, since it connects the world at large. Little Sun provides one portable sunflower light for each light sold; by ordering yourself one (from littlesun.org) you're helping countless families in Africa light their home in a safe and sustainable manner. The light powered by Little Sun enables children, from all over the world, to safely continue their education after sunset. Little Sun’s website states that so far, they have impacted 3.2 million lives with their solar solutions, providing 58 million hours of extra study time for children after dark. Additionally, they’ve estimated $150 million in household savings to those living beyond the energy grid! 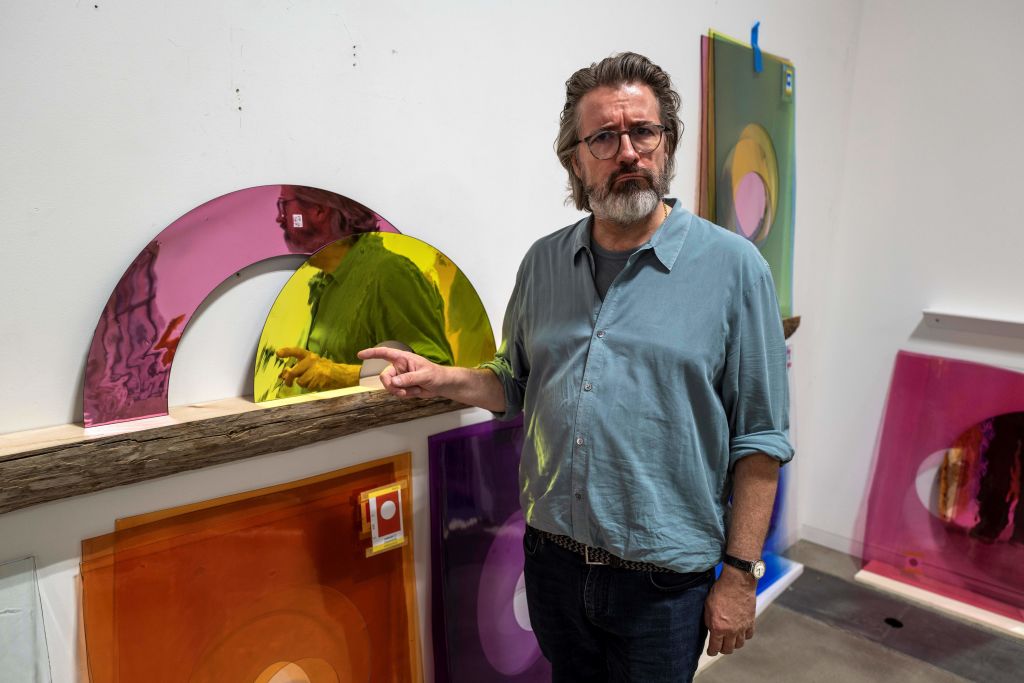 Berlin-based Danish-Icelandic artist Olafur Eliasson poses in his studio in Berlin on June 30, 2020. Photo by John Macdouall/AFP via Getty Images.

Eliasson’s remarkable work doesn’t end there; in 2014, he created a truly immersive installation titled “Ice Watch”. To create this temporary installation, Eliasson placed twelve large blocks of ice cast off from the Greenland ice sheet, from outside Nuuk, in a clock formation in public spaces for all to interact with, however they should choose. This installation allowed passersby to see parts of a glacier melt before their very eyes; touch the freezing surface, listen to the popping sound the ice makes as it slowly melts, and even taste the water that comes from what once was part of a glacier. The time oriented design reminds us that the climate change crisis is incredibly time sensitive.

If you find yourself in the park surrounding the Fondation Beyeler in Basel, Switzerland, before July, you’ll be able to see Olafur Eliasson’s latest work in progress: “Life” (2021). Created in collaboration with VOGT Case Studio, “Life” is continuously evolving, with each passing day. This outdoor scene is also available for viewing on YouTube, allowing everyone to appreciate this fluorescent piece. You can also see more of Eliasson’s work, and learn more about his creative process and background, by watching the first episode of season two of Netflix’s “Abstract”. Olafur Eliasson’s passion, curiosity, exploration, and vision are what make him an inspirational artist of our time.

Are you feeling inspired after reading about Olafur Eliasson? Are you ready to create something extraordinary? Make sure to shop set below for your creation.