Feminist Art: The Quest for Gender Equality on Display

A Brief Exploration of Western Feminism

Male-dominated societies have existed in western civilization since antiquity, with very few exceptions. That began to change in the mid-19th century, when the modern feminist movement began. Significantly, the trailblazing nature of this movement allowed feminist art to develop.

Women’s suffrage was a main goal for the “first wave” of feminism which began with the 1848 Seneca Falls Convention. At this gathering, the feminist movement gained a philosophy and a way to accomplish its goals.

Post-Seneca Falls, large numbers of American women began rejecting the idea that a woman’s prime priorities are taking care of children and managing the household. They engaged in public speeches, large demonstrations, and some even spent time in jail.

Though the first wave ended when women got the right to vote, the momentum of feminism continued. Shifting gender roles gave birth to the “New Woman.” These women were staunchly independent and benefited from job possibilities, educational freedom, a say in civic matters, and recreation, which included the creation of unmistakably feminist art. For New Women, romance was fun, and marriage was acceptable, but matrimony didn’t mean women would subjugate themselves to men. The New Woman idea even crossed class, ethnic, and racial lines.

The second wave of feminism arose amid the tumult of the 1960s and was much more radical. Sexuality and reproductive-related rights were top-of-mind, and much effort was devoted to getting equal rights laws on the books. Women-only groups like the National Organization for Women (NOW) and daring feminist publications also appeared at this time.

The philosophical aspect of feminism was also extensively explored, including the place of women in the art world, which led to modern feminist art.

What is Feminist Art?

Feminist art takes aim at the dominant white middle-class western male viewpoint, questioning the accepted place of women in the world, and challenging the concept of femininity.

Emboldened by the second wave of feminism, American art historian Linda Nochlin wrote the essay “Why Have There Been No Great Women Artists?” in 1971, and modern feminist art history began.

Nochlin declared that it wasn’t a biological deficiency that barred women from artistic greatness, it was social and institutional entities. Nochlin rejected the myth of genius, pointing out that per studies, “genius” develops through life experience, it is not innate in the brain.

Feminist Art at a Glance

Wonder if you’re seeing an example of feminist art? Works of that type span many mediums, such as painting, sculpture, and performance art, but there are many common themes to look for:

Taboos: Feminist artists will present a taboo to shock the viewer into thinking differently about a feminist issue. Context is important here—something taboo in the 19th century can seem tame today.

Empowerment: Here, feminist artists will depict either themselves, or a female element of their art in a position of power.

Stereotypes: This theme sees work that alters a familiar assumption related to women in society into a feminist gesture.

Activism: Protest is one of the pillars of the feminist movement, and many feminist artists do not shy away from shouting down injustice in their work.

Dialogue: In presenting a woman’s perspective, feminist artists hope for a give-and-take with the viewer, getting them to question the status quo and begin advocating for equality.

Note: Some feminist art is explicit, so parents, call ahead before bringing the kids to the gallery or museum.

Mary Cassatt: Cassatt was exposed to feminist ideas in her teens and held them strongly throughout her life. However, because of mid-19th century norms, was compelled to learn independently much of the time because she either was scoffed at, or downright barred from studying in formal settings.

Cassatt spent much of her life in Paris, and after resisting sexist attitudes by part of the city’s art establishment, she became involved with the tradition-rejecting impressionists. Works in this genre have blurred lines and bright colors, and artists were more concerned about the interaction of color and light than precision.

One of the works in Cassatt’s impressionist period was a blatantly feminist painting— “Reading Le Figaro,” created in 1878. This portrait of her mother perusing a daily newspaper may seem tame to modern eyes, but at the time, it wasn’t appropriate for women to be intellectuals and keep up with current events. 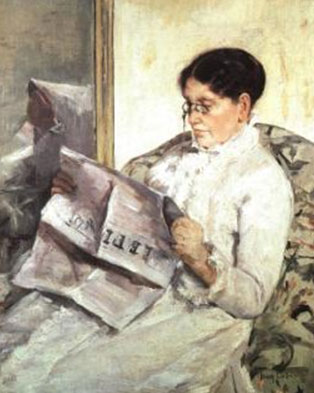 After 1886, Cassatt began creating her most popular works—a kind of “Madonna and Child” update depicting the bonding of mother and child. A popular example is “The Child’s Bath.”

Cassatt’s feminist fire still burned even in her later years. Despite debilitating illness, she contributed 18 works to an exhibition supporting the women’s suffrage cause.

Georgia O’Keeffe: O’Keeffe greatly benefited from the efforts of the first wave of feminism. By the 1910s, O’Keeffe was living as a “New Woman,” and determined to become a professional artist. O’Keeffe used her process of creating feminist art as a type of feminist advocacy, instead of marching in the streets.

In the 1910s, she formulated abstract motifs that she would employ for the rest of her life, “speaking” in form and color about her deepest feelings that were impossible to put into words. “Series 1, No. 8” is a good example of both her abstraction and series painting. 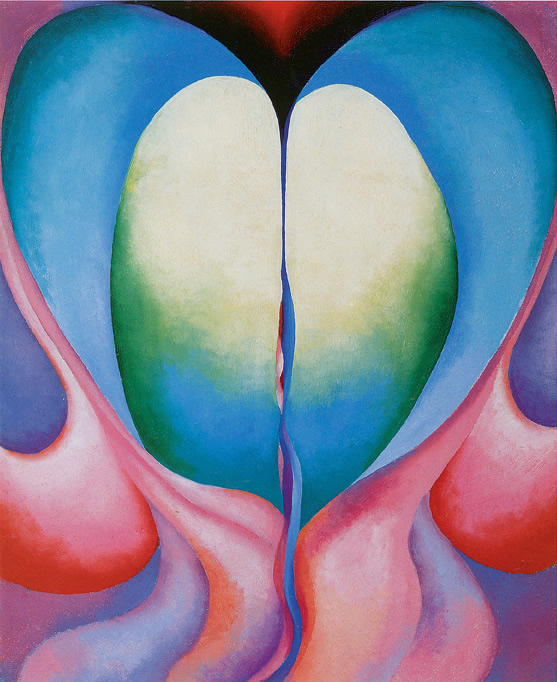 O’Keeffe would eventually be considered the “Mother of American Modernism” and the paragon of feminist empowerment. There wasn’t much of a boundary between art and life for her. Artistic gestures were a common thread in such things as her domestic life and physical body.

She found her bliss in New Mexico, and would artistically present the state’s distinctive landscapes, buildings, symbols, and plethora of animal bones.

Frida Kahlo: Kahlo would become one of Mexico’s greatest visual artists, known for her assertive personality. Kahlo had lifelong health issues, first from polio, then from being seriously injured in a bus vs. streetcar accident in 1925. Bedridden for months, she began painting to pass the time, and found an affinity for self-portraits that definitely fall in the category of feminist art. 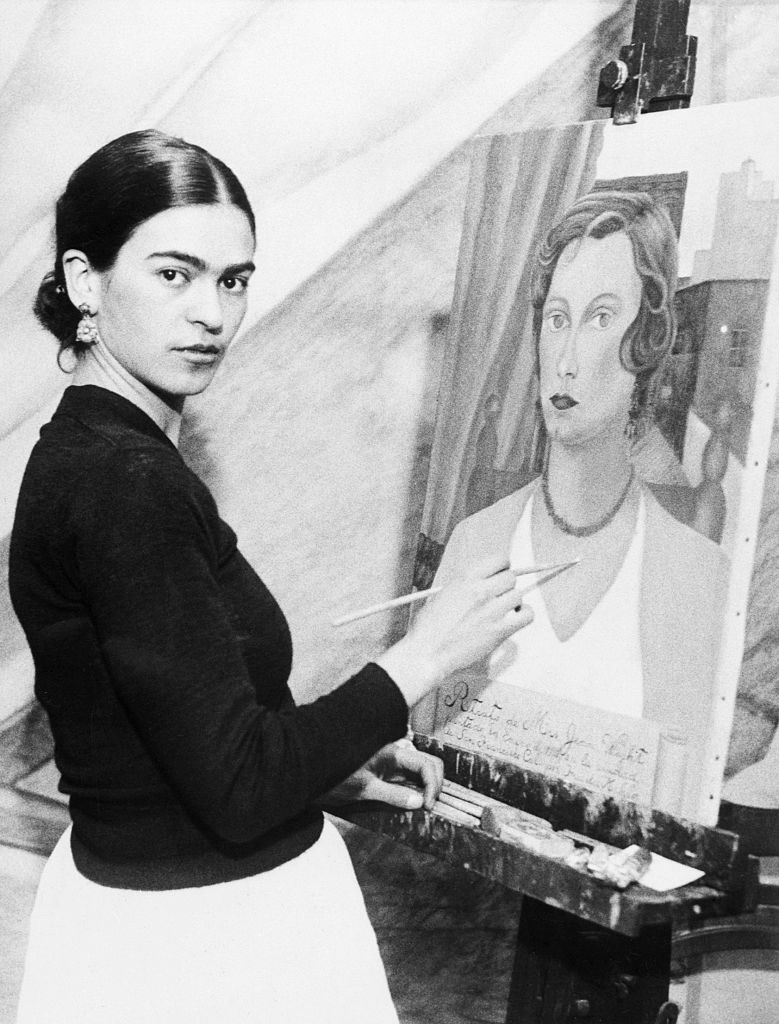 Kahlo often responded to the agonies of her life on canvas, in the strange, illogical, and jarring unconscious imagery of surrealism. “Henry Ford Hospital” had a post-miscarriage Kahlo on a hospital bed, surrounded by strong childbirth-related imagery. “The Two Fridas” was created while estranged from muralist Diego Rivera, with whom she had a turbulent relationship. It has her longing expressed as a double self-portrait depicting two of her personalities, hearts exposed, veins intertwined. She passed away at 47, possibly taking her own life because of chronic pain.

Kahlo defied gender norms from an early age. She appears in one family photo in a man’s suit, and engaged in such masculine sports as boxing and wrestling. Along with the defiance in her eyes in her self-portraits, she had a prominent unibrow and moustache stubble that she refused to shave.

Lynda Benglis: The Louisiana native moved to New York in 1964 to study abstract expressionism, and soon began to blaze her own unique path. Benglis applied Pollock’s drip technique/philosophy to Dayglo-hued latex, blurring the line between painting and sculpture, and was but one experiment with fluid substances. 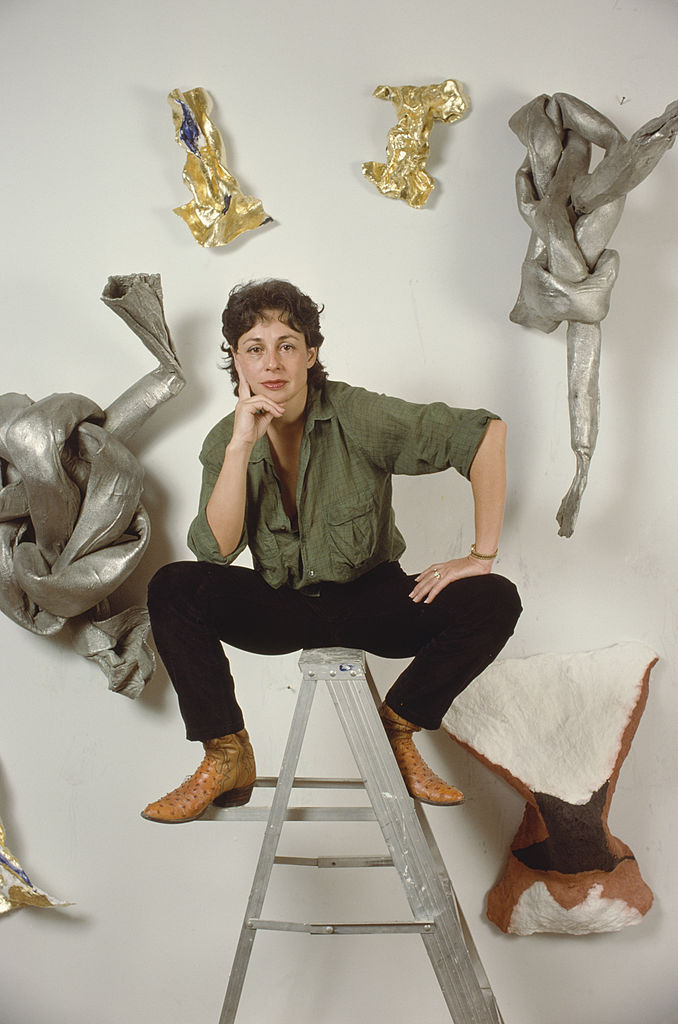 Benglis began exploring feminist art with video production in the early ‘70s. A characteristic work of this period is 1973’s “Female Sensibility.” The short video depicts Benglis along with friend and associate Marilyn Lenkowsky with their faces filling the screen, performing abstract gestures and passionately making out. The soundtrack contained masculine-themed talk radio and music. It was an ironic statement about the plight of women artists exploring sexual imagery.

Sarah Lucas: Lucas is a United Kingdom-based feminist artist who was a member of the Young British Artists, a loose-knit group that began exhibiting together in 1988, known for being ambitious, shocking, and artistically inclusive. Lucas had just graduated from art school as the group was founded and made a name for herself utilizing visual puns and ribald humor with photography, collage, and found objects—addressing such themes as commonplace misogyny in modern culture, and other contemporary feminist art statements. 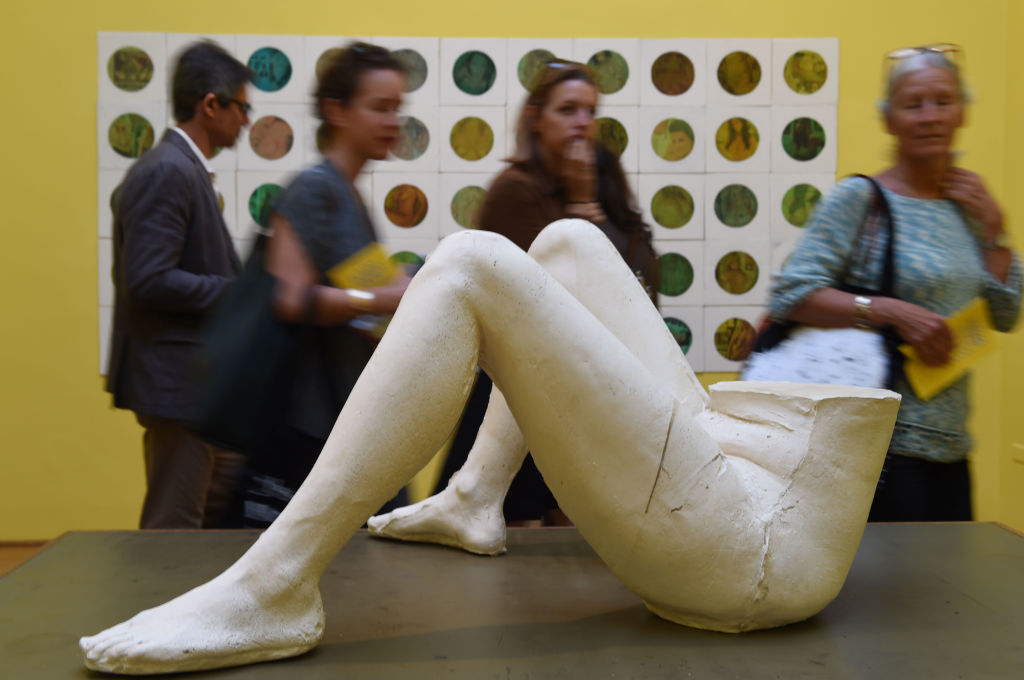 A piece by British artist Sarah Lucas at the 2015 Biennale in Venice, Italy, Getty Images

Lucas did not shy away from sexually explicit art, and often used salacious tabloid newspaper images and text in her collages, naming pieces after the headlines. In fact, the collage that garnered her wide attention at her first solo show in 1992 will need to remain nameless. Lucas has found much success in the ensuing decades, and her work remains some of the most daring, unflinching art pieces to receive acclaim and space in prestigious museum collections and exhibition spaces across the world.

Guerrilla Girls: In 1985, an assortment of posters suddenly appeared on the streets of New York City, pointing out that artwork displayed in local museums and galleries was disproportionately created by male artists. It was among the first efforts by the Guerrilla Girls, a feminist artist activist group. To keep the public focused on the message, they stay anonymous by wearing gorilla masks. 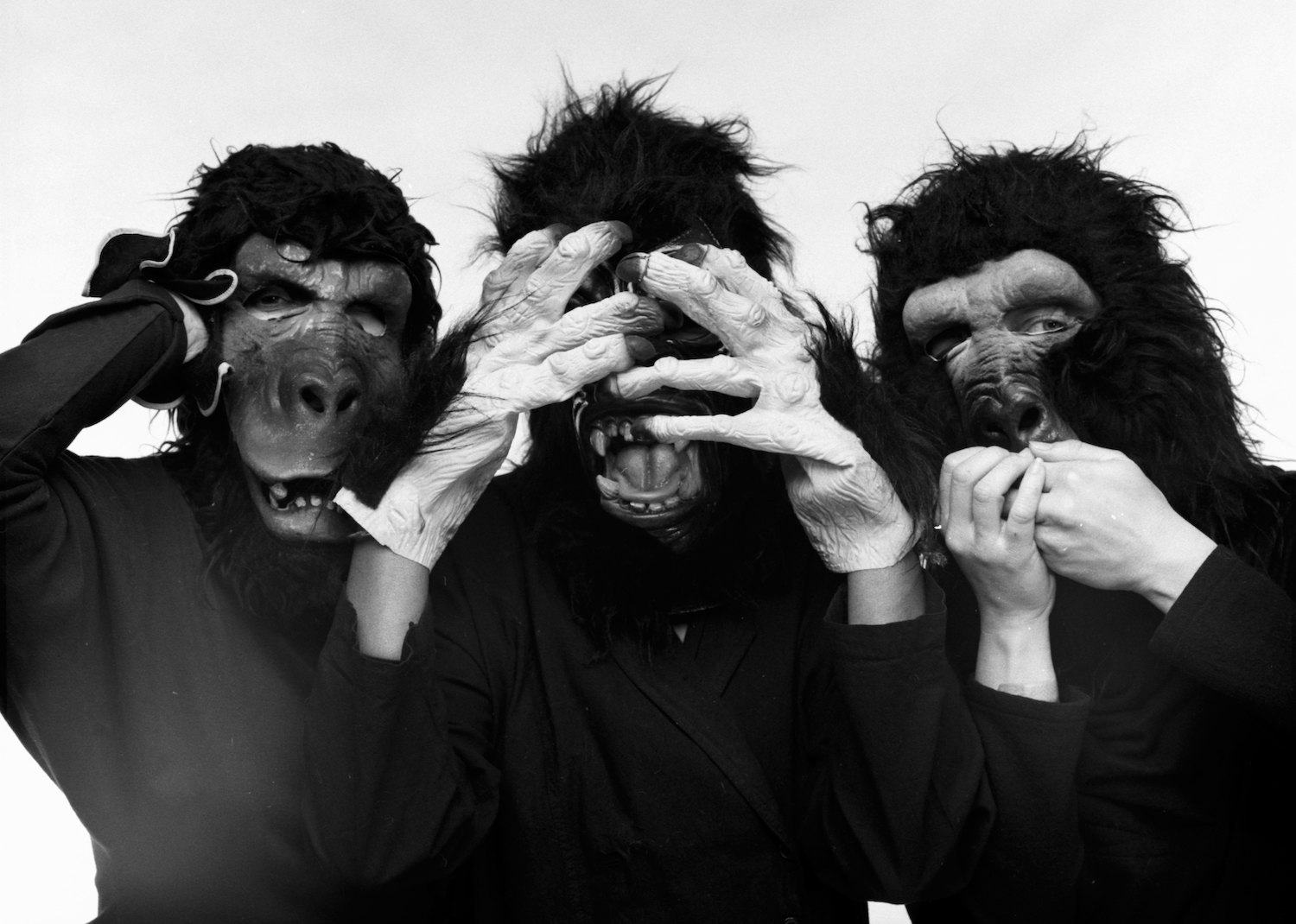 “Culture jamming” is one of their main forms of protest, which is a response to consumer culture, a phenomenon that bombards people with commercial symbols that block any conflicting perspectives. Cultural jammers re-appropriate these symbols to break through the consumer culture barriers.

The Guerrilla Girls have staged hundreds of projects all over the world—utilizing posters, actions, books, videos, and stickers. They have become legends in the ensuing decades, and even had a 30th anniversary traveling exhibit, “Guerrilla Girls: Not Ready To Make Nice,” featuring literature, media, and memorabilia saved from past notable actions.

Feminist art history is still being made, and the movement is continuing to advocate for gender equality in the present day. There will surely still be conflicts to address and barriers to overcome, but feminist artists are up to the task.